Ordinarily New Year’s Eve parties in the Old Country were celebrated in cold weather. People jammed together inside, slamming back beers and chugging boozy drinks like crazy. Add the requisite LOUD band, general hub-bub, and  people you only see once a year, and don’t like very much even then, and that is the typical New Year’s Eve party.

(It’s my blog and I want to make a point, so shuddup.)

Last night we sat on Joni and Mike’s rancho (the hoity-toity local term for patio/deck) which looks due east over the Central Valley of Costa Rica.

It was a very clear night. Visibility was at least thirty miles, upwards of 239,000 miles.

As a bunch of us sat there we speculated on what the bright lights on the horizon could be. The answer given by John, the Science Guy aka St. John of St. John’s Cathedral and Soda, was that it could be the reflection of the lights from Cartargo, the original capitol city of Costa Rica.

We were all satisfied with his explanation until Mike wandered onto the scene and said:

Oh, GREAT! You all get to see the moon rise! 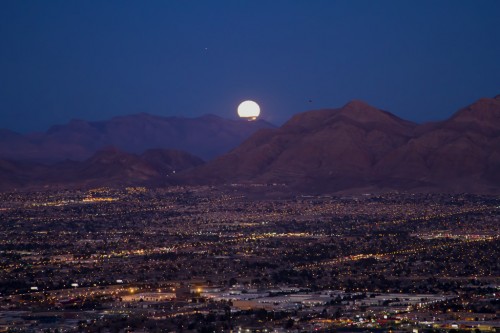 Oh to hell with trying to describe in words what it was like. Here’s a picture. Thousand words and all that. By the way, this isn’t the view we had of the Central Valley. This was stolen from the Las Vegas Convention Bureau.

It’s damn close to what we saw.

The moonrise was early in the evening.  A great way to start New Year’s Eve.

The way it finished was even better.

Shortly after midnight all across the valley as far as we could see from left to right, front to back, a wide vista, hundreds of skyrockets were exploding. Nothing official about the display… people just firing off explosive rockets where they gathered.

Since we were higher than the skyrockets, we actually were looking down on them. Imagine in the above picture hundreds of explosions that went on and on and on… everywhere you looked! The skyline sparkled.

Yeah the skyline sparkled. I’m going with that.