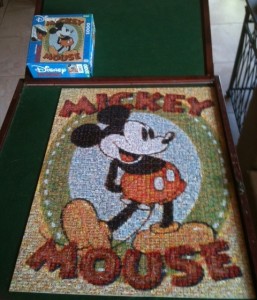 Nancy is a puzzle fanatic. She just completed The. Most. Difficult. Puzzle. Of. Her. Life …ife…ife… (echo effect on)

We imported it from Kentucky where she snagged it from Tuesday Morning at a bargain basement price. It sat at the top of the closet until a month ago.

We even imported a special puzzle-putting-togehter table!

She worked on it off and on for 28 days.  She started the puzzle at Joni’s casa thinking that they would blast through it in an afternoon while Mike and I cheered them on.

Fat chance. About all we got accomplished (yes Mike and I pitched in) was to get the straight edges identified and the colors separated.

She encouraged Joni to come over to our casa to work on the puzzle too. I think after those hours of work they had the “frame” done.

I wanted to help when the frame was put together, but this puzzle revealed my long suspected ADD.

With all those pieces laying out with no rhyme or reason on where they might fit in (also sounds like me) I was bamboozled and flummoxed.

But when it got down to the final 100 pieces, I could help.

Nancy has a puzzle mind, she can look at colors and shapes and have a good idea where a piece should fit. The devious part of this puzzle is that each piece is actually a partial photo of a Disney scene. “Photomosiac”

While still a student at MIT’s media lab, Robert Silvers created a new technology that changed the nature of art, photography, and computer graphics. This development, called Photomosaics, is a method of arranging thousands of tiny photographs that when viewed from a distance, combine to form a single larger image.

Not me…when I look at puzzle pieces I see the shape, nothing more. 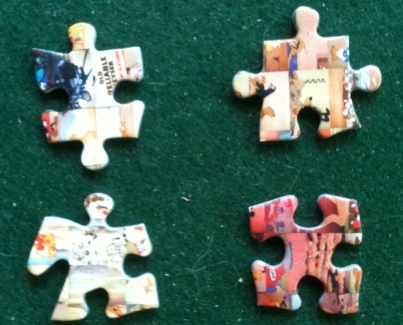 And that’s as far as I got. I would search the table for theses pieces because of their unique (HA!) shapes and fit them in.

I think I put in ten of the last 100 pieces, which brought my grand total contribution to this effort to eleven.

Watch her work her Mickey Puzzle Magic on the last ten pieces and be amazed!