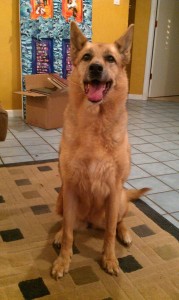 Bulbous and St. Todd deCubville are saying goodbye to their beloved German ShepardChase.. aka Chaser.  She was fifteen years old.

One of their friends commented that our furry friends make our life special.

Those of us who met Chaser and loved her are sad today.

Chase chose to sleep in the guest bath bathtub! With sliding shower doors! As long as she was able, she would climb in the tub and lay there snoozing – sometimes with her tongue hanging out a tiny bit. Always had to remember that when I was making a midnight pee trip when staying at their house. Later in her life, Todd decided that her climbing in an out wasn’t good for her so he made sure the shower doors were closed. She then could lay on the floor next to the toilet.

Now that made for some exciting trips in the dark of the night! Sometimes she moved, but most often, she just layed there – often totally sound asleep.

Even in her old age she kept moving. They called her a “shark” because she seemed to never be still. She would wander from room to room, go inside her dog crate turn around, come back out, wander over to a chair then wander to her food bowl… you get the idea. Until she eventually tired and would curl up in a dog bed or some other safe place.

She wasn’t an attention hound in the end. As a matter of fact, the opposite was true. She didn’t seem want to be petted. She would come almost close enough to be petted and then stop. Except when she heard the garage door opener operate. Then, she would find a burst of energy to greet her master coming home from work. It was amazing how this old girl would bounce around with excitement at getting her head rubbed and some lovin’ from St. Todd.

Chase’s favorite activity right up to the tend was to play Frisbee catch. When St. Todd mowed the lawn she would grab the frisbee and drop it in his path so he would have to pick it up and toss it.

But that’s not where her name originated. She was a Chaser for sure. but Chase was named for Bill Chase, St. Todd’s favorite trumpet player

All the dog’s they have had in their family have a jazz connection.

Bill was the first dog because we thought it would be funny to have a dog named Bill..she was a girl…

Then we got Chase.. Named her after Bill Chase Todd’s fav trumpet player…

So our dogs were named Bill and Chase.

Goodbye Chase. You were loved by many. Something most of us strive for, but never achieve.