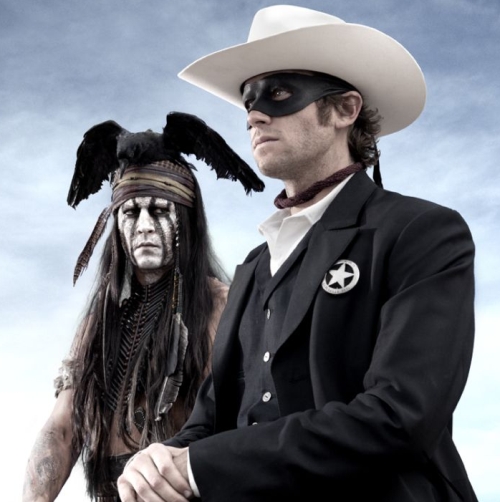 Thank goodness The Long Ranger is finally a feature film. Why hasn’t this been done before now? Hasn’t every classic radio-western-drama already been done?

Turns out, the trail for The Lone Ranger from radio drama to feature film was very complicated.

Almost done with filming of The Lone Ranger. 125 days of shooting seemed to fly by.  We dealt with winds up to 70 mph, rain, snow,  and even wildfires but nothing has stopped us from filming this incredible movie.

I am convinced that what imagination I have came from listening to radio dramas when I was a kid. We had a giant console radio/record player combination. My mother would let me pull the radio away from the wall a little bit so I could see the workings of the radio. I would lie there looking at the glowing radio tubes and the massive vibrating speaker and the theater of my mind would create images the dialogue described.

I was reminded of this theater of the mind when I finished listening to This American Life most recent episode.

If you want to be transfixed for an hour, find a quiet place and plug in to This American Life and listen to Dr. Gilmer and Mr. Hyde. Fascinating story – all true.

After listening to this radio play, I couldn’t help but think what a great movie this story would make. If I was a movie mogul, I would be all over trying to secure the rights to produce this movie.

I’m not a movie mogul, but that doesn’t stop me from going ahead and casting the movie Dr. Gilmer. (No spoilers)

Here are my ideas for the cast of The Case of Dr. Gilmer and Dr. Gilmer:

Dr. Benjamin Gilmer (left) gets a job at a rural clinic. He finds out he’s replaced someone — also named Dr. Gilmer  — who went to prison after killing his own father. But the more Benjamin’s patients talk about the other Dr. Gilmer, the more confused he becomes. Everyone loved the old Dr. Gilmer. So Benjamin starts digging around, trying to understand how a good man can seemingly turn bad.

Mike Martin (the detective who investigated for law enforcement and the person who put together the evidence that convicted Dr. Vince Gilmer): Philip Seymour Hoffman.

That’s it… there are many other characters in the story, but they are bit parts, these four main characters will carry the story.

The cast: Since the story takes place in rural North Carolina. In the theater of my mind, I pictured both the Drs. Gilmer as black men. Thus Washington and Cheadle.

But Sarah Silverman in a dramatic role? Yep, like Robin Williams before her, I think her comedic chops qualify her to play this role.

Philip Seymour Hoffman would make a credible small town detective who is a good guy just doing his job and ends up being the bad guy.

But I’m conflicted… should there be a full blown romantic involvement between Koenig and Dr. Gilmer? just a hint?

I can’t wait for the movie and see how my skills at casting and outlining did by comparison.

If it takes as long for this movie to be made as it did The Long Ranger, I’m screwed.