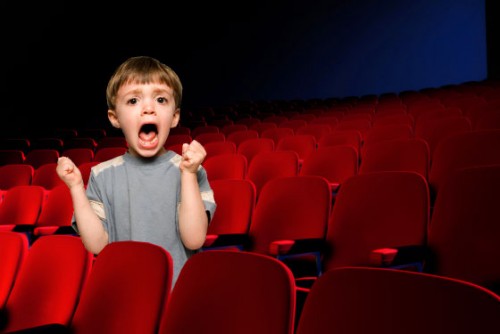 Made me so mad I screamed before the movie started!

I was never more irritated or insulted by an advertisement than when I paid $8 to sit in a movie theater.

And I bet you are the same.

No matter how well produced the commercials that proceeded the feature film, I would tune out. Those around me would be chatting or texting or checking their phones for messages. Never mind the people that are standing in line for a  $10 tub of popcorn or just hanging around to avoid the commercials.

. . . a reasonable proportion of the audience was not exposed to any advertising, although this is, arguably, also a characteristic of other media. Second, the low levels of unprompted recall, the vagueness with which respondents recalled some advertisements, and the varying proportions of respondents able to recall any details about the advertising content, raises more questions than it addresses about cinema advertising and its effectiveness.

Not only that… attendance in movie theaters is plummeting! Netflix and Amazon and iTunes and other online movie sources make it much more attractive to sit in the comfort of your own home. Big screen televisions and improved sound systems and paying $8-$10-$12 per ticket at a theater make staying home easier and far cheaper.

And get this… the people that DO go to movies are NOT the people who will spend money traveling to Costa Rica:

The Nielsen Co., the authority on advertising demographics, says that baby-boomers, the prime target for tourism, don’t go to the movies at the same rate they used to. Movies are attended by those under 24 years or over 64!

So why do people who spend marketing budgets like the Ministry of Tourism fall for this method of advertising?

Because they are lied to.

The advertising agency makes a big commission from placing advertising. Movie theaters know that they are peddling a worthless product so they pay bigger commissions to advertisers who buy from them. The marketing executive in charge of the budget never asks for accountability. They are “sold” by a committee who has one goal in mind: to line their pockets.

And when the campaign wins awards, the agency uses this as leverage to convince the gullible that they are geniuses.

Bloggers: now there’s an untapped market! Sr. Minister of Tourism…have I told you about the hundreds of thousands of people who hang on my every word about living and visiting Costa Rica?