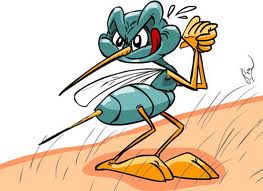 Not to alarm our upcoming visitors (oops too late) but we just had a visit from a representative from the local government-run clinic inspecting properties for signs of mosquito larvae because of an outbreak of dengue fever in Atenas.

He came into the gate and headed right for the old tire that “someone” just had to have!  Sure enough, he peeked into the stagnant water in the tire and pointed out mosquito larvae. He dumped the water and gave me a stern lecture  – most which I didn’t understand because it was in Spanish – but his withering look communicated enough.  He then took the tire and put in undercover so the water couldn’t accumulate in it again.

He toured the rest of the property and didn’t find any other signs of mosquitoes.

We haven’t noticed any… but apparently it’s just a matter of time.

He inquired if we had been sick or been bitten by mosquitoes. He told me there are many people in Atenas who have been sick with dengue and they are recommending the use of repellent, keeping gutters clean and making sure drainage areas don’t have standing water, and of course, don’t keep old tires!

It takes a special mosquito to cause dengue. Here’s the wiki: for Aedes aegypti. Kind of a cool looking species! 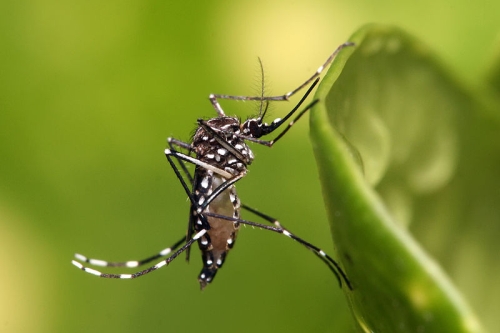 I told him that I use Cynoff and I spray regularly – mainly for scorpions, but he said it was “perfecto” for mosquitoes too.

It struck me as very odd that when I pointed out the empty lots next door with standing water, he shrugged it off.

Ignorance is bliss. I think I would have rather not known about Dengue Fever. It’s not deadly, it causes flu-like symptoms for a week or so. There is no vaccine or cure.

But now I have another dam chore: making sure all the water is moving off our property and keeping us safe from Dengue Fever.

Anybody need an old tire?

(BTW: Nancy saw a Pinterest pin that had something to do with old painted tires. That’s why we had it… Thanks Pinterest!)

There is no specific treatment for dengue fever. You will need fluids if there are signs of dehydration. Acetaminophen (Tylenol) is used to treat a high fever.

The condition generally lasts a week or more. Although uncomfortable, dengue fever is not deadly. People with the condition should fully recover.

1. Dengue fever is a viral, flu-like disease transmitted from human to human by the
bite of a particular type of mosquito, called the Aedes aegypti.
2. The Aedes mosquito can be recognized by the black and white stripes on itslegs
and abdomen.
3. The Aedes lives and breeds in urban areas in water filled man made containers,
such as old flower pots. Old tires are especially bad.
4. The Aedes like slower altitudes; it is very rare above 4,000 feet.
5. The Aedes bites people only in the daytime; it is not active at night.
6. The average time between the bite of an infected Aedes and the onset of
symptoms is 4 to 6 days, with a range of 3 to 14 days.
7. An infected person cannot spread the infection to other people, but can be a
source of the virus for other mosquitoes for about 6 days.
8. Dengue fever usually starts suddenly with a high fever, headache, pain behind the
eyes, and pain in the muscles and joints.
9. A rash usually appears 3 to 4 days after the start of the fever.
10. Nausea, vomiting and loss of appetite are common.
11. The presence of the dengue virus can be detected by a simple blood test.
12. The severe portion of the illness usually lasts a week to ten days, but complete
recovery can take a month.
13. The only treatment is rest, plenty of ffluids, and acetaminophen (avoid aspirin).
14. If there are no complications, there are no long term effects from the disease.
15. The most dangerous complication is a progression to dengue hemorrhagic fever.
People who have already had dengue fever and are infected again are more
susceptible to this complication.
16. Dengue hemorrhagic fever causesthe blood vesselsto start to leak, resulting in
bleeding from the nose, mouth, and gums. Bruising can be a sign of internal
bleeding.
17. Dengue hemorrhagic feveris potentially fatal andmust be treated promptly after
the first symptoms by replacing lost fluids, and sometimes having blood
transfusions.
18. Dengue hemorrhagic fever is fatal is about 5 percent of cases, usually among
children and young adults.
19. There is no vaccine to protect against this virus. The only way to avoid the
possibility of contracting the illnessisto avoid being bitten by an infected Aedes
mosquito.20. Insect repellentshould contain at least 30% DEET to be effective. Strong
repellent like this should not be inhaled or put on the hands of children, where it
could find its way to their mouths.
21. Mosquitoes can bite through thin clothing,so apply repellent to clothing as well
as to exposed skin.
22. There are likely to be many more infected mosquitoesin the downtown Atenas
area than in the outlying areas. If you live in Atenas centro you should have
screens and eliminate all potential breeding sites around your property.