We took Cat and Jim to Morazan de Atenas to pick out a plant for our garden. It’s a tradition we started when we first moved here. Little did we know that serendipity would pop up and give us another fantastic moment in Costa Rica.

After they picked out a Staghorn Fern, we stopped at Chicharronera El Trapiche that is just down the road from the nursery. We had a great lunch. Afterwards Jim and I were checking out all the antique tools hanging on the wall. Jim commented that this was the Costa Rica version of Cracker Barrel!

When we started asking questions about the tools, the guy that waited on us took us to this painting and asked if we knew about it. 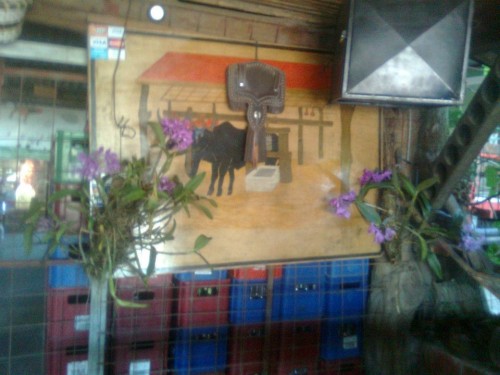 We didn’t… so he invited us to come around to the back of the restaurant and there was a giant sugar cane press! To add to the serendipity of the moment – the day before we had just purchased a Tapa de Dulce and made the traditional Costa Rica breakfast drink. Yes, in the land of coffee, sugar water made with Tapa de Dulce is preferred.

Made from the “typical” local ingredient “Tapa de Dulce”, these familiar (or not so familiar) molded small cakes of firm compacted brown sugar product are very similar to the North American “brown sugar” we buy in a bag.

Also known in many Costa Rican homes simply as “Bebida”, the sugary cane liquid is extracted, boiled, evaporated and eventually poured into conical molds, which are cooled, at which time the tops are cut off making them tapas (“lids”). The traditional drink of “Agua Dulce” is made by cutting or scraping off a bit of the tapa and gently dissolving it in boiling water or hot milk. Delicious!

Tapa de Dulce can be also be served cold with lemon. It is touted as a cure for the flu too. Read all about Tapa De Dulce here.

The sugar cane press was huge! and powered by two oxen – which were taking a break. The liquid is squeezed from the cane, collected in a vat, transferred to other vats, cooked, then transferred to molds. What an amazing process.

Manufacture of Tapas De Dulce in Costa Rica is rare. There are few places left that still use ox to power the press. It is immensely labor intensive. Hot hard work for little monetary reward.

As so often happens in Costa Rica our first encounter with the gruesa (thick) man was tentative in his dealing with us Gringoes. 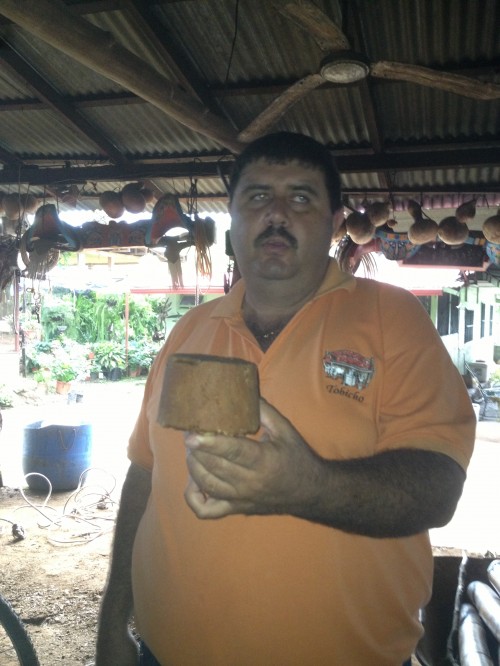 But when he showed us around his “back shop” he opened up and his pride gave us another special moment in Costa Rica. He smiled, he joked, he was patient as we asked “stupid”questions over and over to try and understand the process. He was a great guy.

I’m still shaking my head at what a great experience it was. If your in Atenas, head out to Morazan for lunch and see if you can wrangle a tour like we had.

And my dentist will be happy to know that sweet water is on my list of favorite drinks.