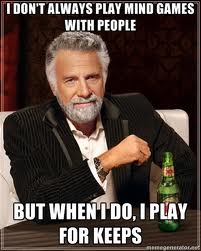 I used to play real money poker online until Uncle Sam decided that we were all scofflaws without any skill. The U.S. declared online poker to be illegal because it was a game of chance, rather than skill.

Recently I took up the game again, this time playing with free chips. Even though it’s possible to play real money poker in Costa Rica, it’s more of a gamble because of the sketchy internet connections.

Little did I know that playing poker can actually be good for me!

Recent studies show that two of the leading causes of death in France as well as Germany are Alzheimer’s and dementia—both attacking the person’s brain until it ceases to function completely. It’s common knowledge that in order for us to avoid the “diseases of old age” we must always do what’s right for our minds and bodies. They may be clichés, but no one can dispute their truths. Having a balanced life, eating right, and exercising will really make us live longer. When it comes to mental health, it’s smart to know what’s good for our brain before it withers.

Like our bodies, our minds also need exercise. Take time to answer crossword puzzles or word hunts in your daily newspaper, go crazy with apps like Words with Friends, or better yet, establish a poker weekend with your good old gang. A bunch of us have been trying to get a regular poker night, but life keeps interfering.

How can poker exercise your mind? Just so you know, the universal card game (which was born in France during the 19th century, then called poque and having a mere twenty-two card deck instead of today’s fifty-two) has been recently classified by the International Mind Sports Association (IMSA) as a mind sport; joining chess and bridge as part of IMSA’s World Mind Sports Games. Those who watch Partypoker’s World Poker Tour on television to pick up techniques and strategies are not wasting their time after all, because doing so makes them analytic, thus helping them develop methods on how to bluff or up their game every time they face their opponents at a poker table. Yeah! Watching television isn’t mind-numbing after all.

Even the icon Bill Gates himself said that a poker player collects different sorts of information—such as what cards show, or who bets daringly, or patterns of bluffing and betting—then takes all these facts together in order to formulate the move for his own hand. Playing poker therefore is not just randomly folding and bluffing—it too is tactical, very much like a war game.

Even law schools in France and the US joined the poker bandwagon, with a move to incorporate the game by introducing measured means to law students so they can defeat their foes on the opposite side of the litigation table. A professor of Charlotte School of Law who is an advocate of this movement compared a good poker player to a good lawyer that primarily considers what the other side has up their sleeves, or why they’re still in the game. Both the good lawyer and the good poker player think of whether or not he has the upper hand, and those who are not as forward-thinking tend to lose—the poker match, and the case.

Let’s play poker when we can and keep our minds active.