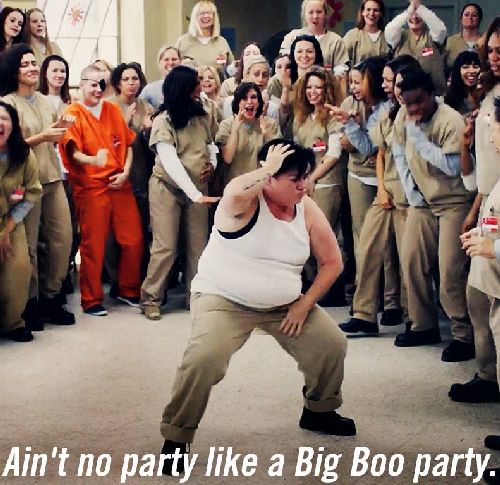 One of the women in the new Netflix series “Orange is the New Black” and I have a commonality.

No, we are not both overweight dykes serving time in prison.
Yes, we use a CPAP.

This demonstrates once again how having Sleep Apnea has crept out of the dark unknown recesses of snoring and leapt into the mainstream.

But a normal size Continuous Positive Air Pressure machine was not dramatic enough for the director. My CPAP machine is about 8x5x3 inches and sits easily on the nightstand. The machine on Orange is the New Black is the size of a room humidifier. It’s HUGE.

Conventional wisdom has deduced that it’s not really a CPAP machine, it’s a portable oxygen concentrator. But she’s hooked up to it using a CPAP mask and hose.

The character that needs the machine because of a “massive heart attack” plays a minor role (at least thru the first six episodes) But the CPAP has been mentioned more than once on the series… so I have a feeling this machine will be put to nefarious purposes eventually in the series. (Spoiler Alert: I finished watching and the CPAP never appeared again.)

BTW: if you liked “Weeds” you will probably like Orange is the New Black. Same creator.

WARNING: This is a very graphic show. But the characters are very interesting and as their tag line says:
Every Sentence is a Story.

If you were being sent away for 15 months, what would be your final Facebook status update?