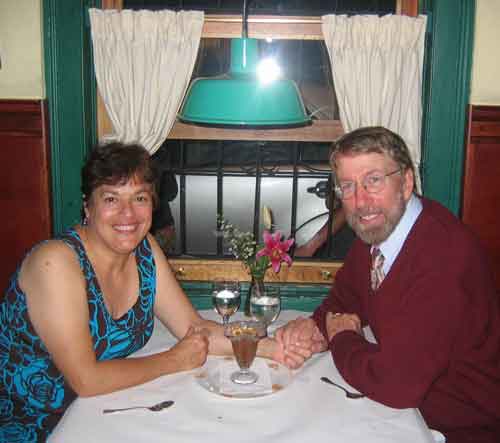 MarketWatch.com did a glowing report on retiring to Costa Rica.

But like so many reports on the life of Pura Vida, it was poorly researched and too general to be much more than a puff piece that could have been written by the Pura Vida Chief Marketing Officer.

I like it here, don’t get me wrong, but the reporter should have done more research than to just quote Paul Yeatman, a real estate agent, a couple of tour guides and magazine that touts living overseas.

The Yeatmans have done a great job of selling their theory that you can live in Costa Rica for less than $2000 a month, and they seem to document this with numbers. The name of the blog is RetireForLess.com, so the numbers serve their purpose.

I don’t know Paul and Gloria Yeatman, but I’m gonna attack their numbers anyway and make some personal assumptions about them based on their annual outlay.

Here’s their expense accounting for 2012. 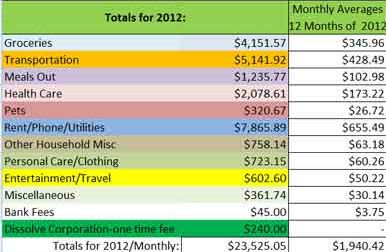 And here is my category-by-category reaction. (Note: I am not saying they are wrong or I am right… just my reaction based strictly on the numbers above.)

Overall, they are living a simple, modest life. Nothing wrong with that, we do too!

Groceries: They eat simply. Paul said in the MarketWatch.com story that they have stopped buying as much “gringo food” as they used to. (They don’t shop as much in the food stores that carry U.S. brand names.) One of them (or both) likes to cook and spend time in the kitchen preparing meals I’m guessing. (Ready-prepared foods like we enjoyed in the U.S. are expensive – there is no such things as a “quick meal” in Costa Rica.) The Yeatmans don’t drink much. Booze ain’t cheap.

Transportation: They have one car and use public transportation regularly.  $100 a week seems right. Figure $60 a week for fuel and the rest is for car repairs and taxes..

Meals out: They don’t eat out much. In Atenas, a meal in the evening at a restaurant (not a soda) will run $20 for two. That’s no booze, no dessert at an average place. So two people eating once a week in a restaurant is $80 a month. A few breakfasts and lunches during the month at the much cheaper sodas and a cocktail here and there will cause that $100 will grow by 50% easily.

So far in 2013 we have come down in our spending over the two previous years, partly to offset other expenditures for the new house.

Most retired people like to eat out for the social aspects.

Health Care: They are young(er) and healthy.

Among those expats were Gloria and Paul Yeatman, ages 56 and 66, respectively, who moved to Costa Rica 4½ years ago.

The Yeatmans probably also got their health care by becoming members of ARCR, which gave them a discounted group rate to belong to the nationalized health care. This is no longer available and rates have increased markedly. That fact and one ongoing health problem – or one surgery – or a dental problem – can drive their $175 a month expenses to double or triple their current outlay.

Reminder: I don’t know the Yeatmans, but in reading their blog, I think I would. This is just my reaction to their expenses and how it relates to our life. Nobody is wrong here!!!

Pets: They have one cat that apparently is healthy. We have three dogs. I think their numbers look about right. We probably spend $25/month per animal and our dogs are approaching “senior” status.

Rent/Phone/Utilities: They live modestly. We do too. But they are getting a helluva deal on rent! Our electricity runs about $120 per month, phones (two cell phones and a landline) run about $25/month, and internet is $60. (Internet could be less if they are using ICE – the government controlled utility service.) That puts their rent at somewhere around $500 per month. THAT is a great deal. Unrealistic for Atenas.

Other Household Misc. No issues here.

Personal Care/Clothing: Mr. and Mrs. Yeatman don’t get massages or pedicures every month. And they dress like most of the full-time gringo residents, very casually. Paul mentioned in the story at MarketWatch that he just got new glasses. Me too, I paid $100 for everything.

Entertainment/Travel: They don’t have the need/desire to return to U.S. OR their numbers will jump significantly for 2013… they spent $1500 on a trip to Mexico thus doubling their entire expense number for 2012.

We have just returned from a 3 week trip to Mexico and are just starting to get caught up. (posted June 9, 2013 and documented at the blog.)

$1500 for a three week trip? I am impressed. One trip by one person to the US will cost $600 in airfare alone. They spent $600 in 2012 and $76/ month last year. And that doesn’t figure in other entertainment expenses. This is unrealistic. Paul admits they don’t travel in Costa Rica as much as they used too. And the Yeatmans want readers to believe than they took a three-week trip to Mexico? Something doesn’t compute.

If you want to read about the Yeatman life in detail, they it at their blog and newsletter.

This is just my impressions about trying to keep up (or down) with the Yeatmans. As those of us who talk with others who want to retire cheaply… your mileage may vary, meaning how you live is different than how we live. We’re not wrong, just different.