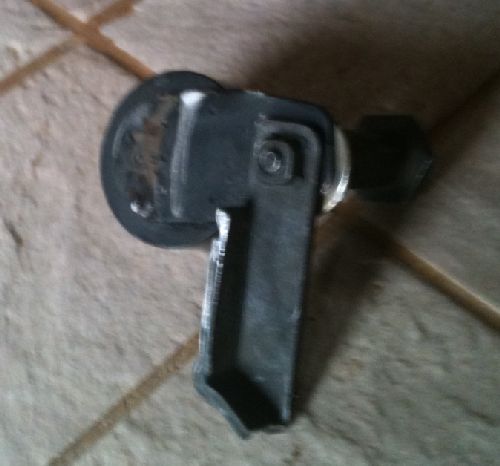 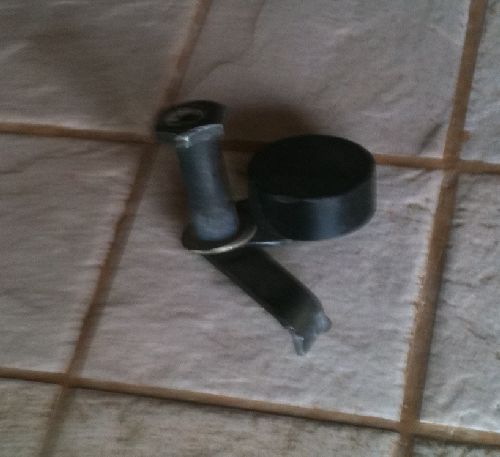 Know what it is?

Nor does my mecánico.

All he knows is that it is some kind of “balance.” He found the piece broken off and lying in the engine compartment next to the belt.

OK, from the beginning.

My car failed inspection. The hand brake was “inferior” by 16%. I finally got over being pissed off about it and took it to Fredy to fix. He took it upon himself to give the car the once over, a pre-inspection inspection.  I arrived at 8: 25 a.m. for an 8:00 appointment. (Gave a lift to three neighbors and dropped them off at their destinations – karma, people, karma.)

He checked all the fluids and stuff the inspectors check. Got to the lights and found the brake lights weren’t working!  Yeah. No shit, how long have I been driving around with no brake lights?

After checking the bulbs and fuses, he checked the sensor switch that the brake pedal activates.

Voila (I think the Spanish equivalent to voila is ¡eso!) – there you go, this blog is now tri-lingual. Jawohl! quad-lingual!

He grabbed the trusty WD40 and got the sensor working again.

About a ten minute fix. But it’s now 10:00 a.m., where did the time go? Fredy was doing three other repair jobs at once:

AND… take phone calls and new customers and getting delivery of parts.

Fredy finally decides that it’s time for the final repair: the hand-brake. I remember that backing out of the driveway, the car has been making a clunking noise. Only in reverse. And only while accelerating.

I figured it was a borked exhaust clamp or borked motor mount.

Fredy said he would check it out.

As he is gathering tools from under the hood he spies something amiss. The piece shown above was kinda wedged in on the left hand side of the engine. Going forward, it just layed there, but in reverse, the torque of the engine came in slight contact with the piece and caused the rattle. He showed me where the belt had rubbed a “V” shaped groove in the metal.

We scoured the engine but could not find from whence it broke. But Fredy said it was a balance. I think that is partially correct. It looks like some kind of belt tensioner.

My friend Mike has the same kind of car, so I’ll be paying him a visit to contrast and compare.

But won’t it pass with just the left wheel braking? I ask?

They used to just levy a fine for an inferior hand brake, Fredy explained, but now they fail the car.

Fredy offers to drive me home, but I knew the 12:30ish bus was available so I took shank’s mare to the bus station. (On the way, I had some laughs with Dra. Victoria and Dennis, and did some money laundering with Cynthia so the day wasn’t a total disaster.) Fredy will replace the cable and deliver the car to me broken, unbalanced and without proper tension, but able to skid the rear wheels on gravel at the yank of a handle.

Because we all know that this is important.

And I will take the car to be re-inspected and hopefully pass with flying colors.

By the way? On the bus ride home, the driver saw a chick that he knew so he stopped with a bus full of people and chatted her up.

I guess he was unbroken, balanced, but a little tense.