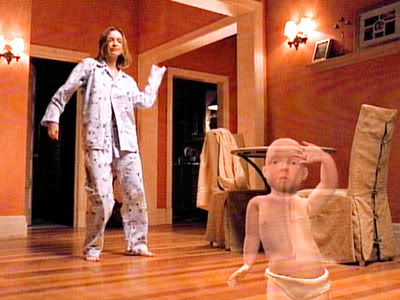 We are enjoying Netflix, mostly because Sling doesn’t stream well and we are exposed to all those commercials for stuff we WANT TO CONSUME.

While watching the X-Files the other day, Netflix suggested that we might enjoy Ally McBeal.

We had forgotten how quirky a television series can be.

But Ally McBeal launched one of the first viral videos of the internet age.

The Dancing Baby aka Oogachaka Baby…

The same animation was shown on several episodes of Ally McBeal as a recurring hallucination, suggesting a metaphor for the ticking of Ally‘s biological clock – further enhancing it as a ‘meme’. On that show it was curiously accompanied by a Vonda Shepard cover of the song “Hooked on a Feeling.” Various commercial advertisements presented the Dancing Baby animation to international markets continuing the mainstream media attention. This particular manifestation of the video, bound to the song, is widely distributed and referred to as the Ugachaka (or Oogachaka) Baby.