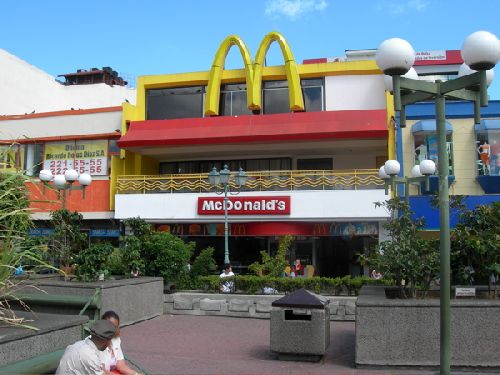 A pretty innocent status update on Facebook has blown into a brouhaha regarding McDonald’s coming to Atenas.

Bad news/good news, depending on your POV…plans are afoot for a McDonald’s across the street from the Correo….

The gringo expats are trying to mobilize to “protect” the Ticos from falling prey to big, bad, McDonald’s,

Here are some of the off-the-wall comments…

People are funny. There are U.S. brands all over Costa Rica – aside from the food brand names that are readily available in almost any grocery store (think Coke, etc.) there are many stores that have U.S. ownership… Pali is owned by Wal-mart and any town that has a grocery, usually has a Pali.

In 2011, 171 foreign franchises were operating in Costa Rica and increasing every year.

Here is an interesting take from a Tico on McDonald’s coming to Atenas.

At home, we eat casados, [Costa Rica’s traditional dish, with] rice, beans, meat and plantains. When we leave the house we want to try something different.

How many of the gringos who are having a conniption fit over McDonald’s would deprive the Ticos of putting a little poison into their diet by eating at McDonald’s? Apparently a lot.

This sums up my feeling about the whole brouhaha (regarding another recent rumor.)

Ha Ha, this has got be the funniest thing I’ve heard since Disney was going to open jurassic park in Orotina.