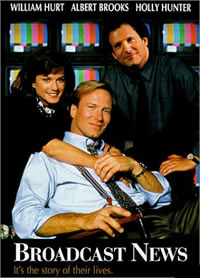 There is a scene in the movie Broadcast News where the up-and-coming pretty boy at the network does an investigative piece on date rape. During the segment the camera shows pretty boy tearing up while the woman tells her story. When the piece airs, the grizzled veteran jealously comments “He’s blowing the lid off nookie.”

His reaction was wrong, date rape is serious, but way pretty-boy handled the reporting was wrong too.

(In the end, grizzled veteran proves that pretty-boy “acted” the tears thus destroying his credibility as a reporter. Ironically the pretty-boy gets on the fast track to the anchor chair coveted by the grizzled vet.)

Two stories that broke this week fall into the blowing the lid off nookie category. Both have to do with exploiting young people’s bodies to the benefit of somebody else The newsers are blowing up with these earth shattering stories:

Those are the equivalent of  blowing the lid off nookie for sure.

Is there anybody that believes that the athletes competing in major sports at major colleges aren’t getting paid? It’s been going on for years and years and years. Ever wonder why colleges invest so much in their athletic programs and facilities? It’s a money grab. ESPN will pay $400 million to broadcast three games at the end of the season.

Would you be surprised to hear that a father was offered $600,000 if his son agreed to play for a powerhouse program?

According to his father, Chester Jones, the 5-star wideout left a $600,000 deal on the table from a collegiate powerhouse before ultimately choosing College Station as his new home.

How about the fact that girls were offering sex to high school boys in exchange for a commitment to come to their college? And that assistant coaches were acting as their pimps?

Blowing the lid off nookie. 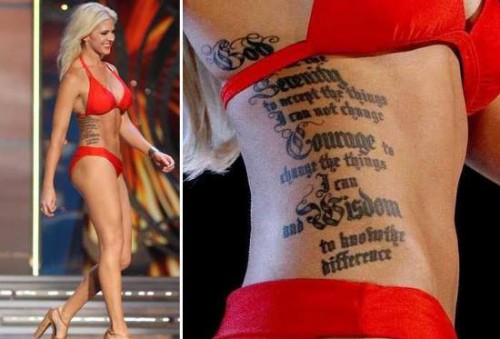 Miss Kansas – Theresa Vail and the most visible of her tattoos.

And of course, the other ridiculous “news” story is the one about Miss Kansas becoming the first woman with a visible tattoo to participate in the Miss America Pageant. She wants to break the stereotypes.

“Why am I choosing to bear my tattoos? Reference A; my platform! Empowering women to OVERCOME stereotypes and break barriers. But I am who I am, tattoos and all.”

Read more here: http://www.kansascity.com/2013/09/11/4474610/miss-kansas-shows-tattoos-at-miss.html#storylink=cpy
So she puts on a two piece bathing suit and struts her stuff. She served in the military fer gawd’s sake.  She is deadly with a bow-and-arrow, she kills animals with a shotgun, She wants to study chemistry and Chinese! Jeez, those don’t break stereotypes? Apparently, it’s a bigger deal that she has some ink to show off that will empower girls to emulate her.