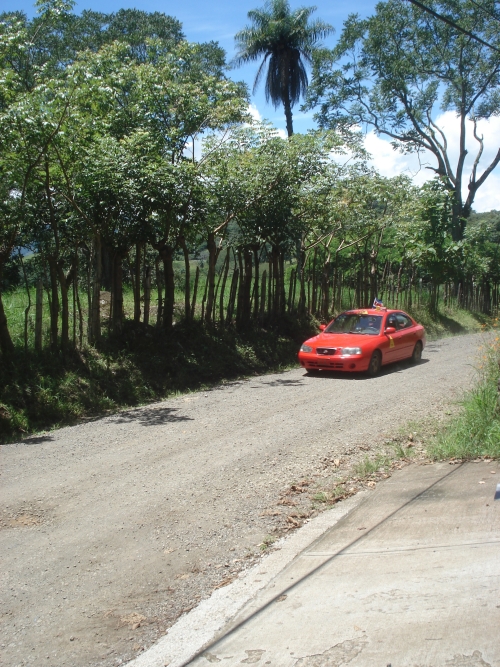 Boomspeak sent me this link today about the issues that arise from wanting/needing to pave a road in Costa Rica.

We live on an unpaved road too and are pretty wishy-washy about whether or not paving the road would be a good thing.

The issue is a complex one for Cody Dillon, a Missouri native who moved to Santa Teresa eight years ago and now manages Florblanca. A paved road would be good for business and even better for her boyfriend, whom she said has suffered lung infections from the dust, but she would rather see the municipality follow through on a proposal raised at a recent community meeting to put melted sugar cane, or some type of emulsion, on the road to control the dust.

“Once you pave the road, you lose that off-the-beaten-track charm,” she said.

We live on the unpaved road that goes from Atenas to Escobal (which provides an access to Autopista del Sol – the main road to the Pacific beaches.) We got a taste of what it might be like if the road was paved when in October of 2011, landslides closed the autopista and traffic was rerouted onto our road.

Nightmare. In just a few hours, the road was pounded into a soupy,rocky pulp. It was fun to watch and hear as drivers chose between driving very slowly through the muck or got up a full head of steam, attempting to bull their way through the sludge.

Neither was successful. Slow meant sinking. Fast meant bottoming out and leaving behind car parts. Luckily this happened on the stretch of road that we didn’t have to use to get to Arenas.

So we could laugh about it.

Paving our road would mean less dust, less wear and tear on cars and humans riding in them. And the trip to Atenas would be faster.

But it would also mean that speeds would increase and the dogs that lie in the road would be dead or injured. The cows that meander from pasture to barn would be endangered. The soccer game that is played on a short section of paved road in “downtown” Guacimo would be frequently interrupted.

The road is not ignored. That’s not why it’s unpaved. Every year, the powers that be contract out to scrape off the high spots, dump dirt on the corduroy sections and roll the road to make it smoother and get rid of potholes.

And of course if the road was paved it would soon deteriorate into a plethora of pastoral potholes.

Our friends hate our road. But the roads they live on – paved – can be just as rough and damaging to cars. Add to that the traffic and crazy taxi drivers and motorcycles, and their roads are probably more dangerous than ours.

Like a lot of things about living in Costa Rica, unpaved roads are a good news/bad news story. We keep hearing rumors that the road will be paved. 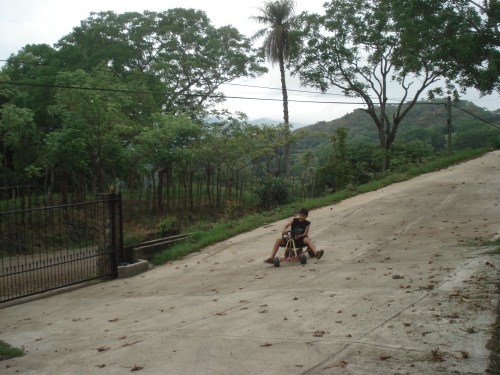 Video: Whaddya think… nasty ride or scenic tour? BTW, the paved portion is one of the better streets in the area. Skip to 2:40 to see the unpaved portion.