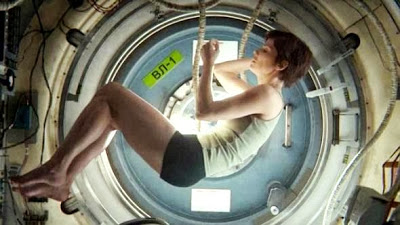 Sandra Bullock as weightless fetus. I thought this looked a lot like a scene from 2001 A Space Odyssey. 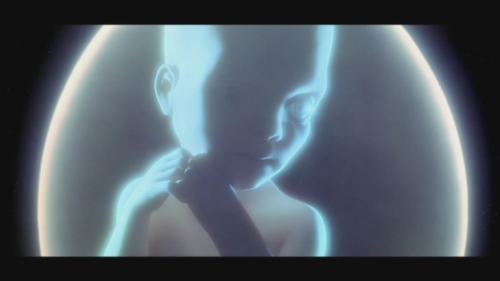 While all us guys were pointing out the technical “flaws” in the movie Gravity, Tom was also absorbing another aspect. Gravity as a parable.

None of us were scoffing audibly during the movie. We followed the advice of a NASA administrator:

“Just forget it and eat your popcorn.”

There was one laugh out loud moment… One of the dead crew was being retrieved and the shot revealed that some space junk the size of a brick had gone cleanly through his helmet and head. You could see earth through the space where his brain used to be.

And during the after-movie chit-chat the guys all snarked that of course it had to be a Chinese made space craft that brought #BullocksButt home safely.

But Tom had an epiphany last night (actually early this morning.)

Gravity is a Christian parable/metaphor that Godless Hollywood made. (I added the “Godless” part.)

Here is Tom’s analysis of the movie as a Christian parable/metaphor. I think he is spot-on…

Dr Ryan Stone (Sandra Bullock) appears to have her life in order, she is the project leader for NASA on a space mission, but the disaster that befalls the mission is a metaphor for her actual lack of control. She has been a single mother and lost her only child at an early age. She refers to her lost daughter as “her angel.” She can’t cope with the loss and only listens to music in the car so she doesn’t have to think about her loss. She has no “life”, just work and drive home listening, not thinking. Just going through life with seemingly no direction.

Matt Kowalsky (George Clooney) is the opposite. First he is prophetic (I have a bad feeling about this mission is his catch phrase.) He is in control, but when he gives a direct order to Dr. Stone she continues to do it her way!  She doesn’t follow the path set out for her.Through a series of miracles, they are both “saved.” But when faced with another life choice, Kowalsky doesn’t hesitate. It is his role to sacrifice himself for the one who disobeyed. This sacrifice alone is not enough. Stone tries to save herself by her own knowledge. When this fails, she decides to give up and attempts to end it all by shutting off her oxygen supply. In an oxygen deprived dream, Kowalsky returns from the dead to tell her to “be not afraid” you know what to do!

Dr. Stone follows the direction of the resurrected Kowalski, and overcomes all of the obstacles. She admits that she doesn’t know how to pray, but her prayers are answered. She prays for Kowalski to see her daughter Sarah. All her “faith” is now in him. She survives the return to earth with a new center of gravity and is reborn from the sunken and lost capsule, thrust to the surface after overcoming one more obstacle – her spacesuit – and taking her “first breath” as a child reborn.

The lost soul , out of control and disobedient, saved by the willing sacrifice of the one who did everything right. The lost soul is not saved until the “savior” confirms the ability to gain control by “letting go” and trusting in his guidance. The lost soul is saved and reborn anew in her new faith!
——- end of Tom’s analysis

Pretty cool, right?
Tom didn’t address the some of the other symbolism in the movie, which others noticed. For example, I am particularly fond of this symbolism that others attached to Gravity.  In the U.S. spacecraft the icon was Marvin the Spaceman, Kowalsky’s reappearance was in the Russian spacecraft, representing an ambiguous figure, and in the Chinese spacecraft,  Buhhda was watching over the craft.
And the most awkward application of Gravity as a parable or metaphor was the shot of the frog swimming past the rising Dr. Stone in one of the last scenes of the movie.
F.R.O.G. = First Rely on God.