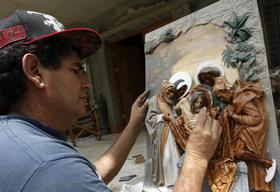 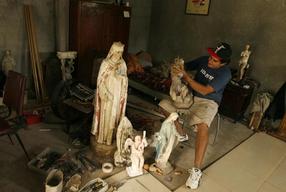 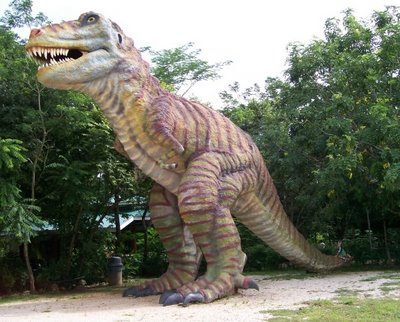 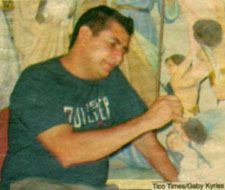 Sunday was Cuco’s birthday so Marciela had a small party for him and one of her childhood friends – Orlando Carranza – showed up.

He is internationally famous for his sculptures. If you’re like me, you are impressed by big art. I know tiny art is just as noteworthy but there is something about making a life-like sculptures bigger than life that blows my mind.

Orlando has done that time and time again in his 44 years. He works in bronze, granite, wood and marmol.

His most recent works were for Mel Gibson at his Costa Rica ranch. Orlando fired up his iPad and showed many photos of his work for Mel and others.

Breathtaking – both in scale and in intricacy.

While most of his art has a religious theme, he is an artist and needs to eat, so he has done a T-Rex, giraffe, and elephant for a theme park in Guanacaste.

His work can be found all over Costa Rica, and in Belize, Mexico, as well as Canada.

And it all started in Atenas.

When Orlando was a child he had a knack for drawing and making things out of clay. As he grew up, he continued his art until he was able to study it full time.

Carranza took first place every year for sculpture and painting.

In 1981, the Ministry of Culture, Youth and Sports declared the 13-year-old “Joven Escultor Costarricense” (Young Costa Rican Sculptor), enabling him to study on scholarship in México. His master was doyen Francisco Zúñiga, one of the most important Latín American sculptors of the 20th century, and a Costa Rica native.

After his apprenticeship with Zúñiga, Carranza received a second scholarship to enroll in sculptural art at the Autonomous University of México. He also spent time in Italy learning other traditional sculpting techniques

Two mexican actresses, Silvia Piñal and Verónica Castro, loved his work so much, they financed the launching of his career.

Atenas residents and visitors see one of his early works regularly as they travel the main highway out of Atenas, Virgen de las Rosas (Virgin of the Roses) sits high on a hill. He also did all of the sculptures of the saints in the Catholic church in Atenas central.

In México, 28 of Carranza’s monumental sculptures are exhibited across the country in parks, gardens and public places. Here in Costa Rica, his religious icons decorate churches in Liberia, capital of the northwestern province of San José, the Caribbean port city of Limón, and San José.

Visitors to Costa Rica might also know his larger-than-life bronze female dancers that mark the entrance of the National Theater in San Jose.

Some of his sculptures reach 15 meters.

Pretty amazing guy. And he was just hanging out with us in Guacimo de Atenas on a Sunday afternoon.

I probably inspired him for his next work of art. 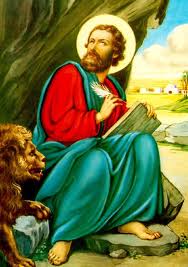 UPDATE: Here is a link that shows a lot more of his work. http://www.ticoclub.com/ceorczo.htm