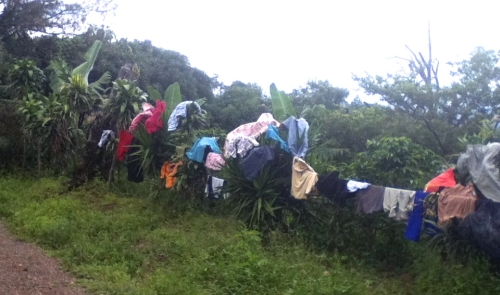 Here are a few examples of how the Ticos live more simply.  These things struck me as very odd at first, but now…  they actually make plenty of sense (well, most of them).

By the way, a friend of  mine observed that he never sees women’s underwear hanging out to dry. I have taken up his cause and will also be much more observant whenever I see the laundry in the solar dryer.  (Thank’s Mikey!)

Her examples included a couple I have not encountered:

Comments on her blog were pretty supportive… except for one wag who compared living the Tico way the same as Dallas Trailer Trash.

Okay, Jen Jen …. Just read your post and I am confused. You didn’t have to move all the way to Costa Rica to see fools on motorcycles, clothes in the trees/yards, trash piled up, and guys walking around with machete’s…..You could have moved to a trailer park in Dallas and seen that!

I’m no expert on Dallas Trailer Trash. I”m no expert on Ticos, but IMHO there is one huge differen ce. The people. I suggest if you knock on the door of a Dallas Trailer Trash tenant you will be greeted by a snaggle tooth, overweight, foul smelling, heavily tattooed woman with greasy straggly hair, dressed in a pair of sweat pants and a stained XXXXL man’s tee shirt, with a baseball bat or six-shooter in hand and a cigarette dangling out her lips.

Or be greeted by a kid with no adults anywhere in sight.

In Costa Rica, approach the gate and yell OPE (the greeting for are you home?) a neatly dressed woman with clean hair and a pleasant smile on her face. She may be a grandmotherly type, motherly type, daughter type, with a few kids in tow, but I have yet to see a woman-slob out in public.

Of course another marked difference is the Trailer Trash tenant will hop in the beater and make a trip to Wal-mart without thinking twice about her appearance.

The Tica in public will have hair done, make-up applied, jewelry in place, and be wearing nice clothes. Smoke in public? Saw it for the first time by a woman yesterday – and I’m not sure that she might have been North American.

Tico Living = Dallas Trailer Trash? On the surface you can say Yes but where it counts – the people, I’m telling you where I live, it’s a definite No.