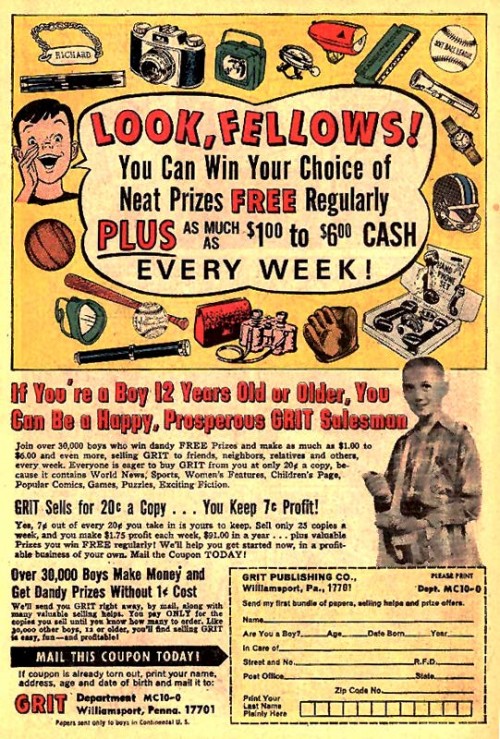 John Glenn, Gene Autry, Tommy Dorsey, even Loretta Lynn and I have a common background.

We all learned responsibility and rewards are not easy.

And that cash flow doesn’t mean you are wealthy.

And that swindling a newspaper can be profitable – for a while.

I sold Grit newspapers when I was a pup. I’m pretty sure I was seduced by one of their ubiquitous ads appearing in the comic books I always was buying.

That kid in the image could have been me, right down to the plaid shirt and toe-head with buzz cut. Aside: Tommy was the only barber in Allen and he knew two haircuts: long or buzz.

I checked with Mother and Dad and they were OK with me taking on the task of peddling papers. And like the ad says, there were over 30,000 boys and girls going door-to-door selling the Saturday-only tabloid.

To earn the NEAT prizes FREE a saleskid had to PURCHASE a bunch of Grits. The more you PURCHASED over a longer time, the NEATer the prize   Never mind about sales… this was the newspaper model. The newspaper wholesales to the carriers who were retailers. Still true today for the most part.

The newspapers arrived rolled in a tight bundle covered with brown kraft paper and tied with twine. They were delivered by Greyhound Bus. The bus would slow down on U.S. 12, the door would swoosh open and out the bundle would fly, rolling to a stop. They delivered to Johnny’s Supermarket and Johnny would fetch the bundle for me a tote it inside.

I would claim the papers, head home and read Grit, and sometime between Thursday afternoon and Saturday (the dateline) head out to peddle my papers.

Going door-to-door was the sales model. No subscriptions. But I soon developed a route of loyal customers and would from time to time make some cold calls when a customer died.

Didn’t take me long to realize that Grit didn’t really care if they got paid or not. “Legitimate” daily newspapers belong to an organization that audits their circulation so that advertisers can be persuaded that the numbers are “real.”

Not sure Grit ever belonged to that organization. I soon started ordering 5-10 more copies a week than I knew I could sell – made those NEAT prizes a little easier to get. I also realized that if I skipped a payment every once in a while, Grit didn’t seem to mind. They sent out nice little letters, but Guido didn’t show up at my door to break my kneecaps.

I was living on cash flow. Take in $5 a week from sales, spend $3 a week on Coke and Butterfingers, and send $3 to Grit.

To keep Grit from not busing the papers to me, I would take some extra cash – from a car wash job, or cashing in pop bottles to get the deposit back, or from stealing from my brother’s wallet, I would make an extra payment toward my “balance due.”

Eventually my laziness got the best of me and I stopped “selling” Grit. I took what I thought was a better and easier job: working for my dad… that’s a whole ‘nother story. Hardest job I ever had.

10 yeas later I started what turned out to be my career – daily newspaper.

I paid very close attention to the circulation audits.