Once again a vocal few Norte Americanos are rising up to protect the Ticos from themselves. Again, the brouhaha is over expanding shopping selections.

Alajuela is about 20 minutes away from Atenas and is a major bus hub for intercity transit. It also is the hospital for the Ticos in the area that used the socialized medicine. It is always a hub-bub. 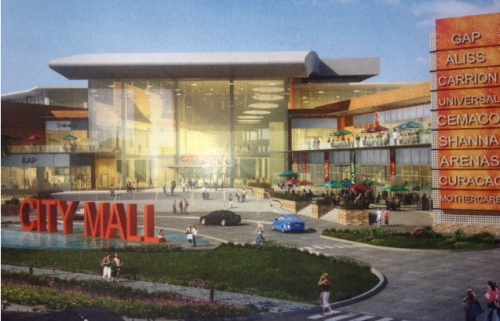 It’s soon will get more hubby-bubby as the Largest. Mall. In. Central. America. (echo effect on…) will be built there. Complete with Ferris Wheel.

It is the City Mall, which will be fully built in November 2015, the Corporation announced Thursday Lady Lee, project developer.

In San Jose, there is a gigantic mall filled with stores of all varieties. Multiplaza is similar to many North American malls – except the signs are usually in Spanish (sometimes not!)

Atenas apparently is going to go thru a growth spurt to – as ground has been broken for a new Wal-mart operation called Maxi-Pali. Wal-Mart already has a presence in Atenas with Pali . Correction: MegaSuper is not owned by Walmart. I’m guessing one, if not both, will be shuttered. But the shopping culture is different here.

Any town of any size has a central market that is chock full of very small “kiosks” or “pop-up” stores. It’s not unusual to see four meat markets selling only chicken at an intersection of aisles. And apparently they all have developed a loyal following for the butchers who own the shops. Same goes for produce. Ticos will walk past six meat markets or produce stands to shop at their favorite.

Atenas went through a major change for grocery shopping when a new CoopeAtenas (co-pay as it’s known locally) super.market opened.

It is by far the most modern store in Atenas – wide aisles, good lighting, good ventilation, lots of parking – something the other supermercados don’t have. Ticos shop there. Gringos shop there. But the other stores with narrow aisles, bad lighting, and no ventilation (Pali and MegaSuper) are still packed with Ticos on shopping day.

It will be interesting to see how Maxi Pali impacts the shopping culture in Atenas. In the U.S. and Canada some people still freak out when a Wal-mart announces expansion.

One thing is for sure: Ticos don’t freak out over anything.