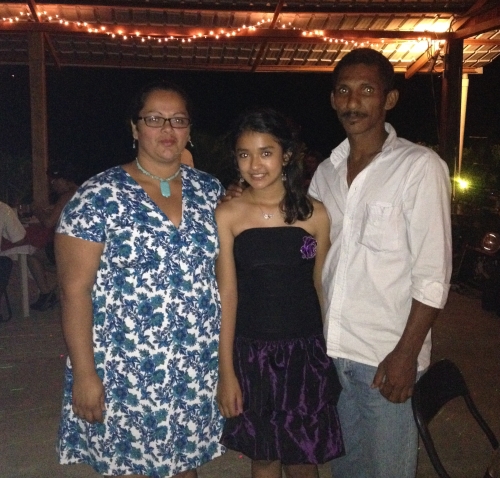 How I ruined 6th grade graduation in Atenas, Costa Rica:
I didn’t speak the language.

Dylana will graduate from sixth grade in a week or so. Since attendance at the graduation ceremony is limited because the school doesn’t have have enough seats for the large extended families of Costa Rica, the school invites friends and family to come to a dinner for the graduates.
At least that’s the impression we were operating under.
Dylana’s mom, Maricela, invited us to attend the dinner.
We were honored and pleased to say yes, we would be happy to attend and of course we would be glad to tote the family to and from the event.
Until.
(click for dramatic introductory music that you know and love…)

Soon after we accepted the invitation for the graduation dinner, Nancy discovered it was the same evening as the Atenas Festival of Lights Christmas Parade… the holiday highlight of her year.

This was a full blown Costa Rica fiesta…

We were the first to arrive (at 6:00.) But other families were close on our heels

It was held in a rancho on a farm on the outskirts of Atenas. Linen tableclothes, candles on the tables, the whole nine yards. And the people dressed in their absolute finest. The girls were all dolled up with strapless dresses and spiked heels. Sixth grade girls!

The sisters, aunts, mothers, and teachers were all decked out in their most fashionable attire too. And there is one thing for sure in Costa Rica – the women know fashion and love to wear it.

We found our reserved table and parked ourselves.

First clue that this wasn’t a quicky dinner and speeches: there was a deejay – with disco ball and light show.

These kids were here to Par-tay.

The dee-jay fired things up about 5:30 and the dancing commenced. Three hours later, they were still dancing. The Christmas Parade was well underway. 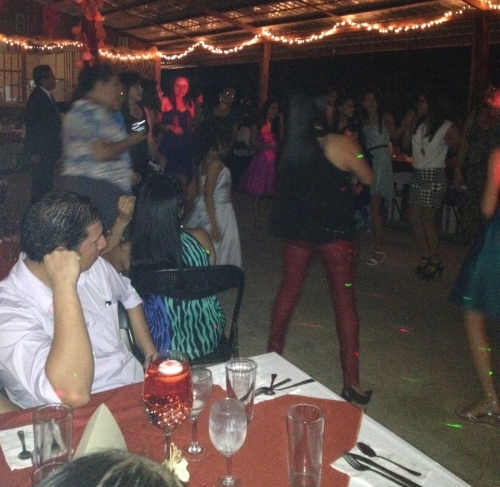 See the guy on the left? Yeah, he and I share the same enthusiasm.  I looked over later and he had his phone out playing a chess game! Other adults were staring at their phones too… either reading Facebook or texting or who knows what? The twelve year old girls all had their phone out taking selfies. The boys were twelve years old too… so who knows what they were up too!

Since I don’t speak the language, it’s hard to carry on small talk. Hell, the language I do speak sometimes I fail at making small talk. So communicating that we really hadn’t planned on spending the whole evening and well into the night partying with sixth graders, was out of my spanish language skill ability.

So I Facebooked and played solitaire on the phone.

I asked Maricela if Cuko had arrived by car or taxi. Our understanding was that he was picking a guy up arriving from Canada, taking him to his house and then Cuko would come to the party. Nancy and I were planning on it as a matter of fact. They would then have their own way home.

About 9:30, I typed into Google Translate: I am ready to go home. Do you want a ride home? and slid it over in front of Nancy and gave her the look that conveyed… shall I shove this in front of Maricela?  Without hesitation, Nancy slid the phone to Maricela.

I excused myself and went to the bathroom.

And thus I ruined the sixth grade graduation party for a twelve-year-old girl. When I came back everybody had assembled ready to load into the car.

First one to leave the party.

This morning, I find out that while I was bringing the car up the hill where everyone waited, Dylana told Nancy at at 10:30 the music stopped and everyone would get hats and horns and there was a balloon drop like CARNIVAL or Mardi Gras – Nancy’s second favorite holiday.

I coulda lasted another hour. Really. After all, we missed the Christmas Parade already. I had some podcasts all lined up that could have occupied me that last hour… even longer.