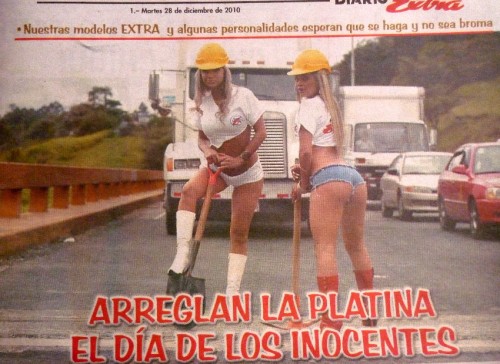 The construction congestion is not due to lane closures, machinery or the platina itself, but rather caused by rubberneckers ogling the butts of the women hard at work.

Are you a fool most days? just on April Fool’s Day? or surprise!…. you could be a fool while in Costa Rica in December! December 28th in Costa Rica is “Dia de Los Inocentes” (Day of the Innocents), commonly considered “Fool’s Day”. In Spain and Latin America December 28 it is a religious holiday.

Tiicos love to pull off large and small pranks on their friends and family on this yearly day of tom-foolery is a yearly event. Everything from the simplest of jokes, to the common gesture of putting a sign on your back that might reads “kick me” or “looking for love”, to more vulgar jokes such as wrapping dog poop in toilet paper, lighting it on fire and waiting for the nearest “Innocent” to stomp out the fire, or another favorite in our humid climate, leaving a melting chocolate candy on someone’s seat so when they sit down, it later looks like they pooped in their pants when they rise.

“Peeing in public is what makes this city great,” Obregon said of San Jose during the announcement of the new holiday. “Imagine walking down the streets of San Jose and not smelling stale urine. Would you even call it home?”