It’s also the dry season in Costa Rica – no rain for thirty days.

Great day to fire up some torches and burn some bees, no? 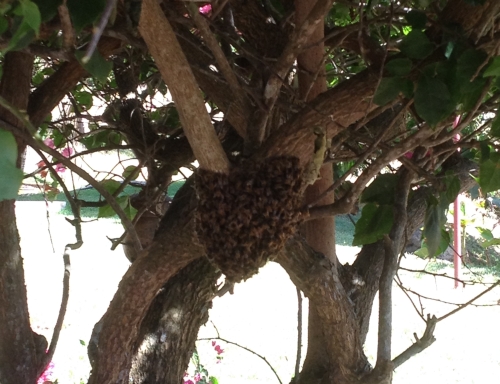 Our friends Tom and Lee are bee experts. They probably will disown us when they read this. But since we’re not bee experts and local legend says the bees here are Africanized, and I’m a big chicken, I asked our mob-boy boss to get rid of them.

They made their hive in the Bouganvillea tree where I like to park myself from time to time. I noticed the other day some bees buzzing. We often see “bees” making nests in the eaves of the house… they are harmless and easy to get rid of. I just whack down the nest with a broom and they disappear. So I ignored them and moved. 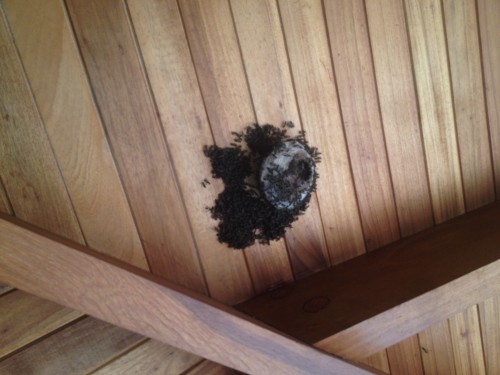 The bees took my lack of interest as an invitation to become permanent residents.

When I asked mow-boy boss how to get rid of the bees, he said a torch was the most efficient. He then related a story of an Atenas man who was driving his tractor down the road and ran into a a tree with a bee hive.

He died from the stings.
Gulp.

But the Ticos took pity on the Geezer Gringo and we cobbled together a couple torches, I added some torch fuel to the paper and they burned the nest and all those hard working bees.

Q: What do you get if you cross a bee with a door bell?
A: A hum dinger!

UPDATE: Here’s a better way to torch a hive – flamethrower: