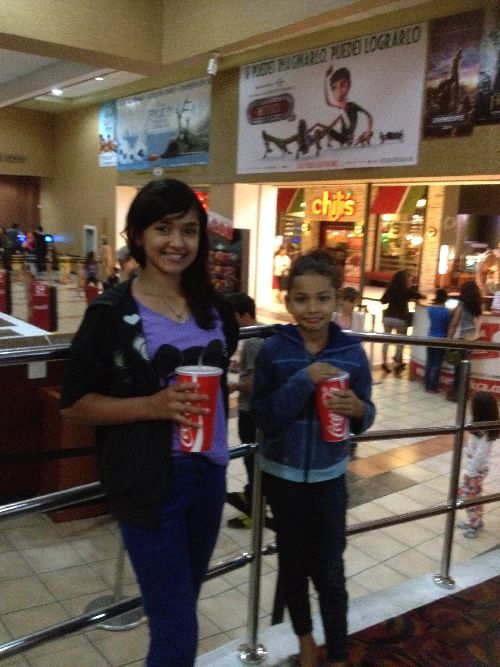 Last year to celebrate the end of summer and the soon to beginning of another school year, we took Dylana and Nazareth to the beach.

This year, we gave them a choice: going to San Jose to the mall and see a movie – or back to the beach. No hesitation… CINE (theater) they agreed.

We thought it would take a couple weeks for a kid movie to show up at the theater, but like most movie houses during the breaks when kids can attend, they were showing a couple good options: Frozen or Walking With Dinosaurs.

Walking with Dinosaurs was in 3D, so that was their choice.

Oh yeah… it was dubbed into Spanish with no subtitles.

I figured that after the 3D effect wore off and I lost interest, I could plug in the iPhone and listen to some podcasts.

Never happened. Because it was a movie aimed at kids, they made the plot simple to follow, which we did.

Nancy got a little confused thinking that the boy and girl dinos were brother and sister, when actually they were romantically inclined. (She’s been watching too much of the Borgias.)

It was educational and entertaining.

Afterwards, we left the theater and proceed to prowl the mall. I asked the girls if they were “caminado con dinosarios” (walking with dinosaurs) and pointed to Nancy and I.

They giggled and said “No.”

UPDATE: Pretty sure this was their first time in a movie theater. They had been at the mall before, but will still pretty wide-eyed. Dylana gasped as we left the mall and she caught sight of one of the office complexes still lighted up. “Wow” she said.