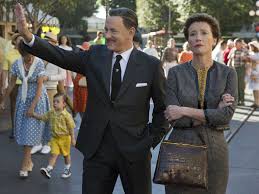 Because I had to pee.

To make a short story long… I only had a vague idea that Saving Mr. Banks was the story of how Walt Disney wooed P.L. Travers, the author of Mary Poppins, to make her book into a Disney movie.

I never saw Mary Poppins. There, I said it, does that make me some kind of communist? So I didn’t know the characters or the story.

After the movie, I was still so confused. Who was Mr. Banks? Where did Mary Poppins come into the picture.

Turns out that because I didn’t consult RunPee.com – the website that used to tell you when you should go pee during a movie, I missed a crucial part of the movie.

RunPee.com used to reveal certain times in movies when the scenes were unessential to the plot. It was a cool site because they would also summarize the scene – but hide the text unless you indicated you wanted to read what you might miss.

But, I would have missed it anyway because RunPee is now an app you have to pay for. I don’t pay for apps.

Saving Mr. Banks is done as flashbacks to when the author was a child. I went to pee when the inspiration for Mary Poppins showed up at her house to care for the author’s sick dad.

So there you have it… I missed the essential plot point of Saving Mr. Banks because I drank a Grande Coke.