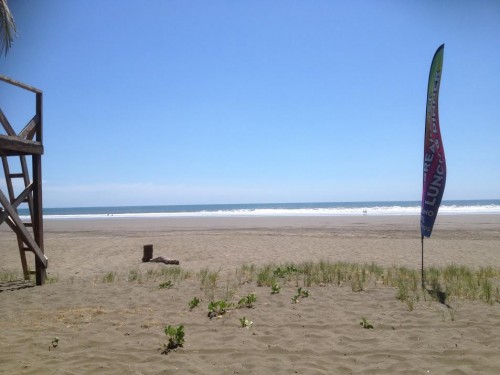 Yeah, nice way to start the day at the beach.

We hadn’t been on a Beach Day for a long time, today was the day a bunch decided to spend some time relaxing at Pelicano Resort near Esterillos Este.

We plopped our stuff down on the nearest table and headed toward the water – about 100 yards away across the dark sand beach.

Even with flip-flops on the sand that flew up and under our toes was HOT. HOT. HOT.

So we did the careful flat-footed walk until we got to the water.

We did our little thing in the little tide and went back to the stuff and made ourselves at home. Shortly a woman came walking up the sand moaning and wailing about the hot sand.

Since we all moaned and wailed about the hot sand, we were unmoved. Somebody through her flip-flops to her.

Yeah, she was BAREFOOT.

As soon as she sat down and showed the bottoms of her feet, we realized the seriousness of her injury. The poor woman was really suffering. An ambulance arrived and took her to the nearest clinic.

I sure hope they had good drugs because I can’t imagine what her life is gonna be like while she heals.

She apparently walked about half way to the water and realized she was in trouble and turned around and walked back. We are guessing that she had neuropathy of the feet that prevented her from realizing that she was burning herself. I could not have walked three steps in my bare feet on the sand – literally.

Lesson learned: do NOT underestimate the power of the sun near the equator on sand.