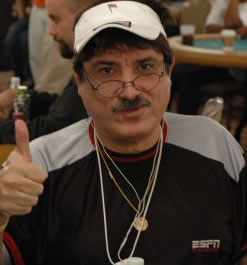 This is one Tico I don’t want to sit across a table from.

He was just voted into the Poker Hall of Fame.

He came wandering into the airport and I recognized him immediately. But I couldn’t recall where or when or his name. So I figured he was just a newscaster – somebody I had seen on the tube.

Not too many other people recognized him as he sat in the restaurant, or if they did, they were playing it cool. After he paid his check, he wandered past me and then I could see his PokerStars.net shirt.

Bingo! Light went on… he is Humberto Brenes. He was born in Costa Rica but currently lives in Miami Lakes, FL

He has collected two World Series of Poker (WSOP) bracelets, cashed 72 times at the WSOP and made three World Poker Tour final tables. He tied with Phil Hellmuth, Jr. for highest number of money finishes (eight) in the 2006 WSOP.

He’s easy to spot at tournaments. He usually wears an orange tracksuit and wears two pairs of glasses on top of each other with a signature visor!

He’s won over $6 million in live tournaments, and who knows how much he’s earned playing high rollers in private games.

I’m glad I saw him at a restaurant table and not a poker table.

Other famous Ticos that have crossed my path: