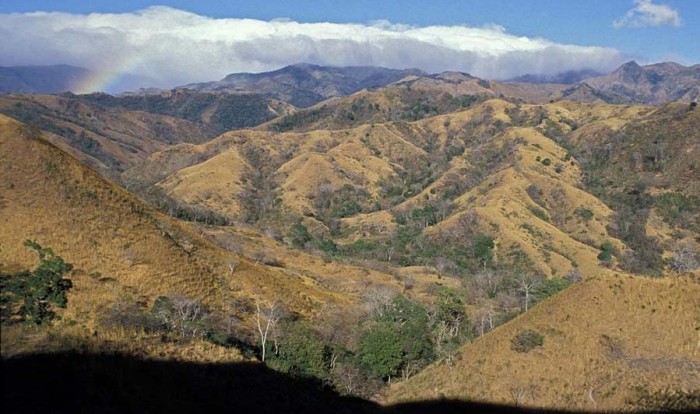 1. Atenas Costa Rica has the best climate in the world according to National Geographic magazine.

2. Costa Rica has two seasons: The Dry Season and The Green Season.

The first is easy to debunk. The National Geographic magazine NEVER wrote that… but like all good marketing campaigns, it has a life of it’s own and is often repeated as fact. I have no problems with a good marketing campaign, I do have a problem with attaching it as a quote from a reputable magazine. It’s the definition of “Truthiness.”

The second lie having to do with the two seasons… it’s also truthy, but the seasons are “dry” and “wet” or “brown” and “green.” Mixing the two is like putting ballerina slippers on a rhino. It may look cute, but it will never be graceful.

Calling it the “green” season may sound nicer, but it doesn’t change that fact that everything gets wet and stays wet until the dry season.

We got our first overall soaking rain this morning. It’s been at least 100 days since our last good rain. Consensus is that the “green” season has started … ugh.

I didn’t move to Costa Rica to be wet. I’m not crazy about the onset of rains and clouds. Having never-ending muddy dog prints everywhere, dealing with breeding grounds for dengue mosquitoes… and having to unplug electronics at the first hint of a storm. And dog-killer toads breed…

Other names for the season that isn’t “dry”:

I put the “I-Love-Green-Season” folks in the same boat with “I-Love-Snow” folks.