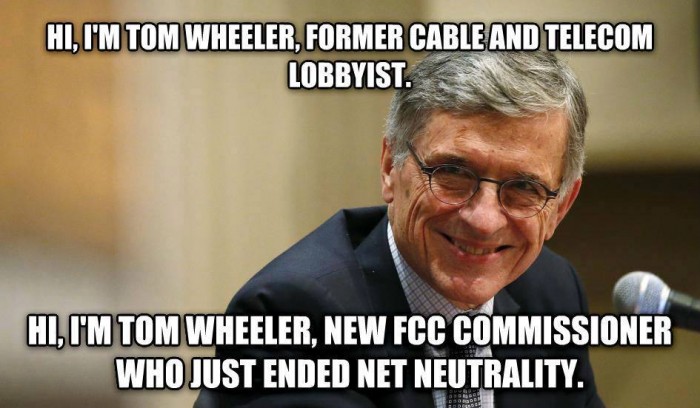 You should write to the FCC and register outrage at the proposed new regulations regarding access to the internet.

If you haven’t heard, the fox is guarding the hen house.

Tom Wheeler is in the Hall of Fames of the telecom industry and the cable tv industry. He’s the top guy at the FCC which regulates the internet.

He is threatening the very existence of internet innovation through a new regulation.

…the plan that President Obama repeatedly opposed, beginning in 2006. It’s the plan that network neutrality advocates have fought against for eight years. He is emphasizing what AT&T always conceded: that carriers would be unable to “block,” that a provider will not “degrade” whatever is today’s existing service (and tomorrow’s “slow lane”), and therefore the Internet will remain an “open pathway.” But as Wheeler, Werbach, and Weiser concede, he will permit paid fast lanes. He will even permit cable and phone companies to offer fast lanes exclusively to one competitor and not to others.

If you like the internet, you must remember everything you enjoy was a startup at one point. Email, sharing photos, Facebook, YouTube all were startups. In order to garner an audience they used the internet to reach us. Imagine if these startups were regulated to the second tier internet. Not slow, but not as fast as the big guys that pay big fees to get special treatment.

The FCC is corrupt. It is a revolving door of industry insiders who regulate then leave the FCC to become lobbyists for the companies the FCC regulates.

If you aren’t convinced this new regulation is a bad idea, then say so. If you think it IS a bad idea, NOW is the time to drop an email to the FCC openinternet.fcc.gov

Buy into Wheeler’s argument that “things won’t change” just look north to Canada where the major cable/telco Rogers Communications throttles Skype because it competes with their phone service.

Internet access should be treated as a public utility, just like electricity and water. Then this issue would disappear.

Otherwise the fox will start eating the hens.