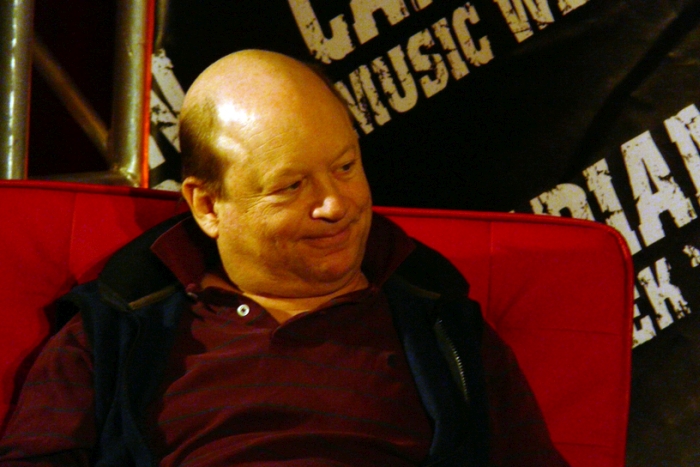 Bob Lefsetz is the author of The Lefsetz Letter an online record-biz op-ed that mixes analysis, rants, boomer-rock reveries, and the odd bit of futurism. Like most music bloggers, Lefsetz posts frequently and verbosely; unlike most music bloggers, he has actually gained the interest of the music industry… but… he should stick to writing about music because his latest rant about cars is just wrong and full of illogical thinking.

I’m worried about Bob. He may be suffering from thought disorder. Maybe he’s off his meds.

Kids don’t buy cars to get laid. Their’s an app for that.

OK,  Bob you got me on that one. Kids aren’t doing the nasty dance in the back seat of their father’s Oldsmobile much anymore. No reason because Mom and Dad let the girl/boy friend stay overnight and enjoy the comforts of home, or the roommate just puts a pillow over his/her head while the couple enjoys coitus. It’s a lot easier for the young ‘uns to find a place, public or private, for some hoochy-coochy.

Welcome to the baby boomer nightmare, wherein everything they’ve held near and dear becomes irrelevant. Like automobiles.

Nobody avoids an event because of car trouble anymore.

Bob still pays his local AAA in case he has a flat tire! Never mind that there is an app for that too! He’s so afraid that he will be caught in a “seedy” area. Hint: stay out of “seedy” areas, Bob… He observes that people don’t need a tow due to a clogged carburetor equating that with the blue screen of death.  He thinks clearly enough to realize that all cars on the road now have “run flat” tires. So you pay AAA for what again ? Symptom of a thought disorder?

Bob uses another bit of illogical thinking struggling to make his point and increase his word count. He says the first computers were like the first cars, expensive, hard to find and harder to operate.

But thanks to Henry Ford and Steve Jobs, cars and computers are easy to operate for the masses. And he adds some link bait including benefits of the Google Driverless Car that is on the streets. He concludes that this will become the standard by which all Americans move from A to B. Ha.  Never happen because the car and insurance lobbies want us on the road careening about smashing into each other.

And then he comes to his Coastal Bias. (Bob Coastas Bias?)

Joy in driving? Taking a few weeks or months to drive cross- country? Why would anybody want to do THAT!

Nobody wants to actually SEE another person.

You don’t have to leave your house to connect with your friends, you don’t have go to the mall, as for doing illicit things…sexting is more outre and volatile than anything baby boomers could ever cook up.

You’ll soon be entering a nursing home Bob and you’ll need to make some pretend friends, so there’s that. But concluding that the populations will give up “just hanging out” is another symptom of early onset thought disorder.

To the younger generation cars are transportation, nothing more.

Poor Bob, he thinks that the young ‘uns don’t like to drive pretty cars. He’s pretty sure they only want wheels to get them from A to B. He maintains that car manufacturers only need build one kind of car – a people mover. Never mind that some peoples are different than other peoples. We all need to conform to Old Bob’s Law: we are all the same.

Ever notice that every smartphone looks the same? Yup, a rectangular brick

Bob makes a huge leap imagining that Tesla can make a $20,000 car… and everyone will flock to Tesla to buy putting GM and Toyota out of business.

And he saves his best, illogical thought for the end…

Cars are the newspapers of today. Something oldsters can’t live without and youngsters can.

Yes, cars are newspapers. Whuck? So ridiculous that I’m blocked. Here are two charts. The car sales are raw numbers, the newspaper is percentage change. But both are looking pretty good the past few years, right Bob? 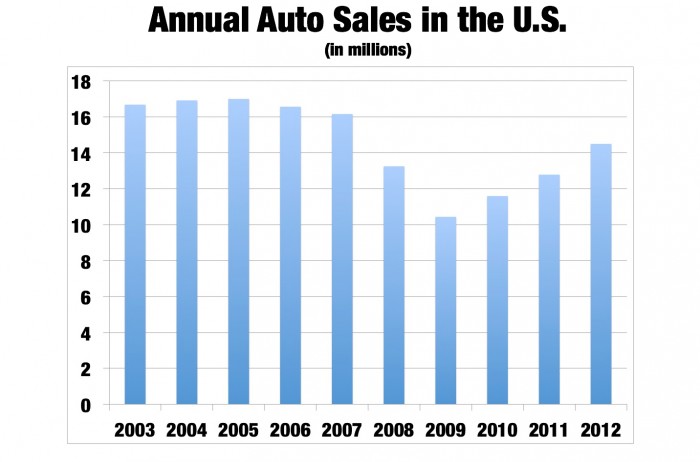 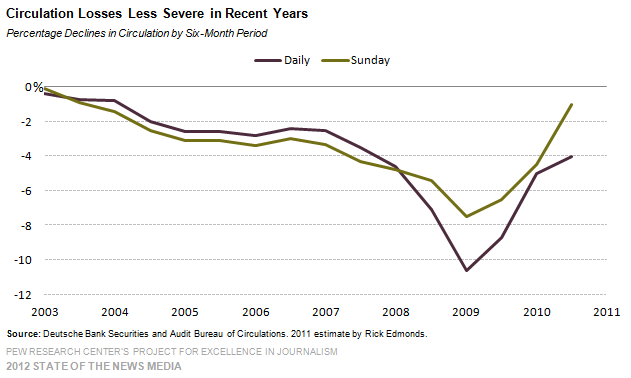 Kids don’t like hidden fees so they will pay more

Yes, Bob, these kids nowadays are gullible and lazy and stupid. Rather than do the math on the cost of car ownership they would rather just get the Uber app to bring them a car and let somebody else do the math so they can pay off their massive student loan debt – too lazy and stupid to work while going to college.

Baby boomers did a horrible job creating a future

In other words, we live in a world built by baby boomers that does not square at all with the needs of their progeny.

Yes, Bob, I started out agreeing with you and will end up agreeing with you. Baby Boomers just blew it when predicting the future for their spawn. I know I spent a lot of time thinking about the future in the backseat of my father’s Oldsmobile… is the spawn I am creating a Windows, Android, iOS, or Google person?