↓
Disappointment abounds around Going Like Sixty… that I wasn’t asked for my opinion about The Boomer List premiering Nationwide Tuesday, September 23 on PBS. 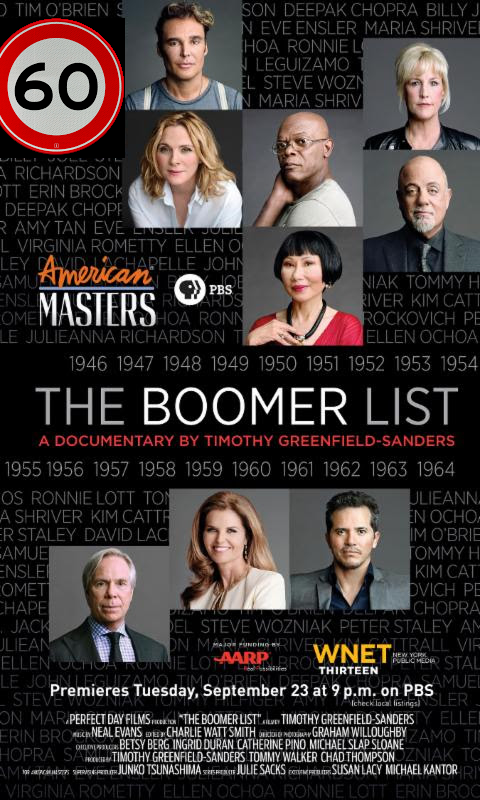 American Masters: The Boomer List, attempts to tells the story of the boomer generation through the lives of 19 iconic boomers–one born each year of the baby boom:

Interviews by filmmaker/photographer Timothy Greenfield-Sanders (The Black List, The Latino List, The Out List) focus on these individuals’ exceptional achievements, struggles and identities, sharing the experiences of these extraordinary Americans and the history they lived through and often created. Subjects illuminate the key movements and changes that shaped the world during the baby boom years, discussing the environment; arts and entertainment; science; civil, LGBT and women’s rights; law; politics; public service; sports; the military; technology and media.

“When I learned about this year’s boomer milestone, I came up with the idea for The Boomer List. The film captures the boomer generation’s dynamic spirit through 19 distinct ‘American Masters’ who had a profound effect on our world.”

says Greenfield-Sanders, whose past films include About Face: Supermodels Then and Now and American Masters – Lou Reed: Rock and Roll Heart.

Apparently he didn’t think enough of the generation to interview a plain old boomer… like say, MOI!

“The Boomer List is a celebration of this generation’s impact on American culture. It is impossible to encapsulate in just a few words, but thanks to the talent both on camera and behind the lens, this remarkable film offers an incredible chorus of voices that somehow captures the zeitgeist of this era,”