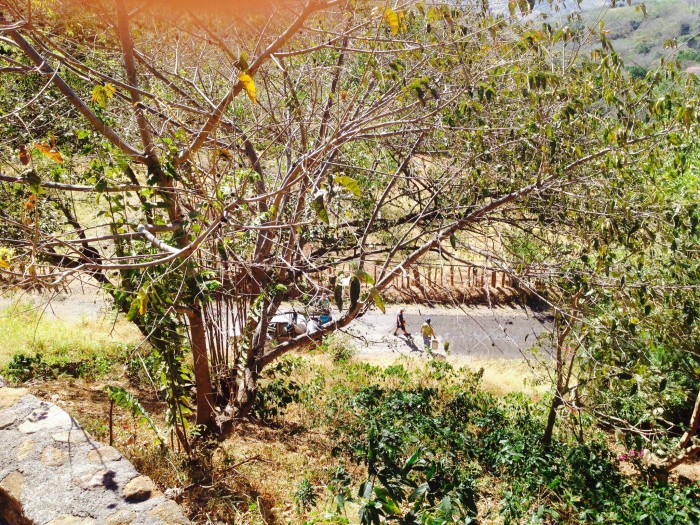 As a country boy, I can remember the good old days when a dusty road was controlled by spraying used motor oil on it.

In eco-friendly Costa Rica, they banned this practice because all the oil eventually ends up in the rivers which lead to the oceans.

Our house sits about fifty feet above the a dirt road. As you can imagine during the dry season the few cars and trucks that do pass by can raise a pretty good cloud of dust.

This year has been unusually windy – there are seasonal “Winds of Christmas” that normally start Mid-December and end Mid-January. This year they are still blowing.

In the past, we have gutted out the inconvenience of having dust blowing in and covering everything. But this year it’s different.

When we first moved here, the contractor that build our home-addition said that they former owners put “honey” on the road.

We asked the gringos around if they had heard such a thing, and most responded like we had two heads. (Of course they all live on paved roads/streets.) Our spanish was no where good enough to ask a Tico.

Honey. It just didn’t make sense… even though honey is sold everywhere so there must be a lot of hives, but how much honey would it take to fill a 55 gallon drum? Plus honey has some value so it just seemed silly to put it on the road.

But Molasses! Now there is the solution! Molasses made from sugar cane. Tons and tons of sugar cane is harvested this time of year.

Honey? Molasses? Sweet sticky stuff. Now we know what our contractor was talking about.

Our friend Pat found this great story about a Costa Rica town where the business pay to put honey on the streets.

One quick search on Facebook and I made contact with the woman in the story and she gave us the low-down.

And our lawn-care guy, Mario, knew just the place to find a good supply of molasses. He arrived this morning bright and early with his crew, two 55 gallon drums full of molasses and another empty drum for diluting the molasses 50/50. (In case you need a weekend DIY project.) 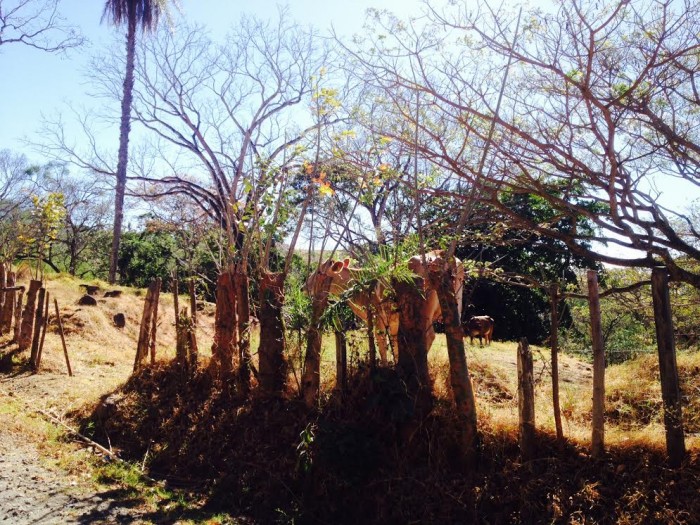 Mario said he brought the “postre para las vacas” (dessert for the cows.) We wondered if the cows that wander up and down our road from farm to pasture… maybe some “dulce leche” (sweet milk) will be in the offing?

They had a large bucket in which they had punched multiple holes in the bottom to make a giant sprinkling can.

In a matter of a few hours they had done the stretch of road in front of our house and the dust is gone.

We’re not sure how long it will last. Seems that in Playa Guiones the molasses is effective until the first rain. I’ll keep you posted!

Meanwhile, we already know the molasses on the road is working.

Now if we just can find a way to get rid of the dog hair! 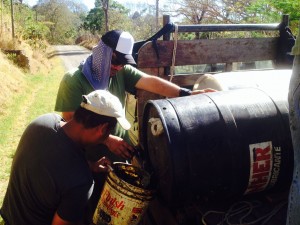 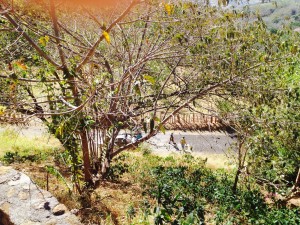 We sit high above the road 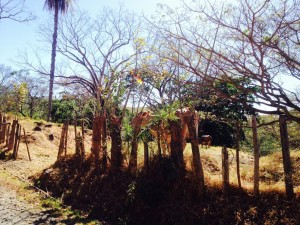 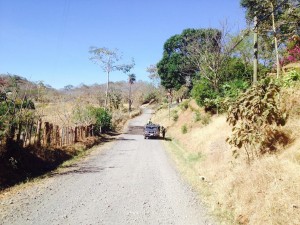 Stretch of road being treated 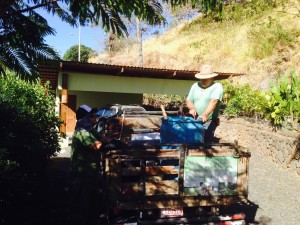 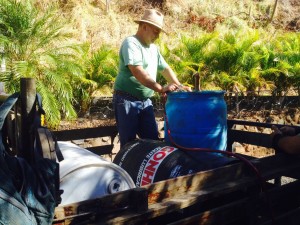 Two barrels with Molasses and one for mixing