There was an impromptu trucker’s strike blocking many of the major highways in Costa Rica. Usually they announce well in advance the stoppage so people aren’t surprised.

The Autopista Del Sol, the major highway from the Pacific Coast to San Jose was shut down. It was reported that the alternative West/East highway, Highway 3 was also blockaded.

So this meant that people wanting to get to the coast to San Jose could drive on Highway 707, the dirt road we live on and then catch other roads, missing the roadblocks.

The people of Guacimo decided that this was the perfect opportunity to get the attention of local elected officials. They blocked the road with tree stumps, boulders – decorated with the Costa Rica flag.

I had the car at home and was supposed to meet Nancy in Atenas after a knitting shopping trip she took with friends. I made it about 500 meters from our gate until I hit a traffic jam!

Drivers that were turning around said the roads were blocked “everywhere.” So I parked and walked up into Donwtown Guacimo. That’s when I saw the “bloqueo” (blockage)

I saw a lot of neighbors – including our housekeeper milling around the roadblock. But I couldn’t speak Spanish well enough to figure out what was going on.

A friend who is fluent in Spanish soon arrived and told me that the people of Guacimo knew the autopista was closed and seized the day to block our road in protest of its poor condition. They contacted a local official and supposedly s/he was to arrive on the scene to hear the protests. 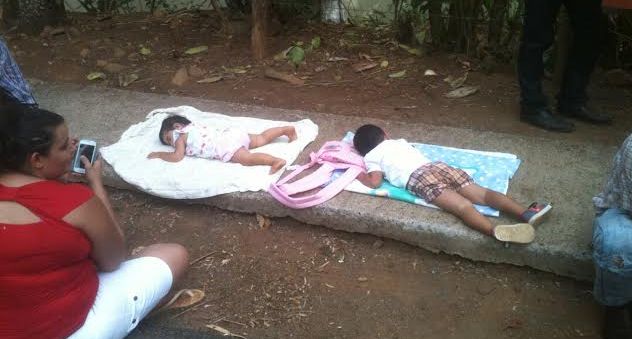 UPDATE: It was an entirely peaceful and quiet protest. No chanting, no marching, no turning over of cars. Just people milling about sharing their frustration with the government.