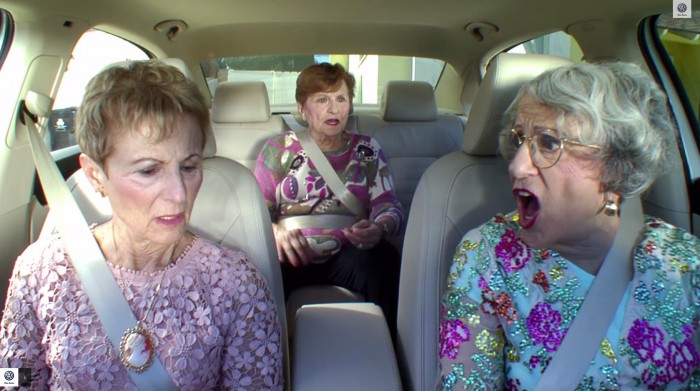 The latest commercial that made me laugh is the Golden Retrievers in the Suburu.

The latest commercials that made me cringe star The Golden Sisters – three old bitties spouting obnoxious and rude comments that reinforce the stereotype of bitter withered wrinkled old ladies who go through life complaining.

I didn’t know they were a “thing” until I read about them by accident. I figured they were just casted to play a part.

They are really sisters.

But I didn’t know they had a name, “The Golden Sisters” and were such a thing.

The oldest sister, the no-nonsense Mary Bartnicki, 85,  is actually the most outspoken, and as with most oldest children, loves to tell the younger ones to “Shut up!”  One of the younger twins—75-year-old Teresa  (“Terry”) Dahlquist—is actually a talent agent and tends to overact, while her twin, Josie Cavalluzzi, sometimes plays second banana.

Born with the maiden name of Conticchio in the fair borough with the “The” in the name, all three have maintained their brash Bronx-ishness despite living in California’s San Fernando Valley since the 1960s.

Two years ago, the sisters became the unlikely insta-stars of the Internet, when a video of them reacting to watching the Kim Kardashian/Ray J sex tape on “the computer” (as Mary  calls it) went viral. It reportedly got two million hits in 24 hours—all  by people under the age of 50, according to Google Analytics.

Without showing any of what they are looking at—the pre-Mrs. Kanye’s XXX-rated stuff—the sisters’ facial reactions and judgments are given to play-by-play analysis like, “It’s got a purple tip!” and “She’s just laying there.”

Of course an ad agency wanted to jump on the bandwagon – God forbid they do something original like the “Dog Approved” Subaru commercials.

VW agency Deutsch LA started with making a few low-cost social videos with the sisters, for Golf TDI clean diesel (mostly a young person’s car.).  Titled “Old Wives’ Tales about Diesel,”  these made clever thematic sense, given that Mary, Josie, and Terry are the new version of old wives. (Mary is a widow, but a merry one.) Apparently the spots are lightly scripted,and the sisters improvise the rest.

The VW dealers went so crazy (understandable because local car dealers have no marketing sense) for the sisters’ work that they wanted to use the sisters in the year-end “rear end” sale event for the Passat, and also decided to double down by running snippets of the Diesel work on TV.

Bright spot: geezers with a bad attitude have a future in television commercials.