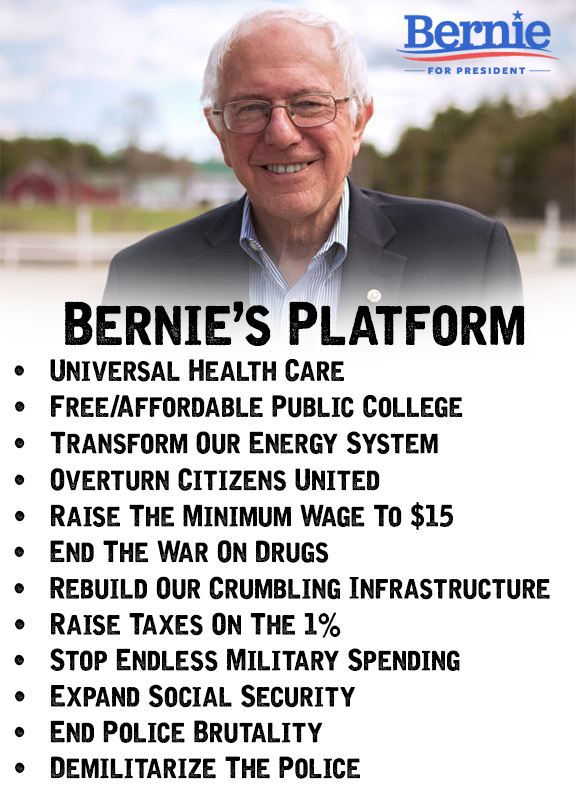 I’ve identified with Democrats more than Republicans for most of my life. Not that I’ve never voted for a Republican, hells bells, I even campaigned and voted for Richard M. Nixon!

Yeah, since then, I’ve voted for Democrats for President. I’ve voted for a few Republicans for state and local offices – often because the Dems didn’t put up a candidate.

When Hillary Clinton was made Secretary of State, I thought she would be getting great experience to help her be a better president after Obama. But like a lot of voters leaning Democratic, I had a “feeling” that just made me slightly uncomfortable. But I still felt she would make a better president than any Republican on the scene.

But since Bernie Sanders has become a viable threat to Hillary’s nomination, I’m jumping on his band-wagon.

Bernie is not my anti-Hillary candidate. Nor is Joe Biden. I’ve decided that my gut feeling about Hillary and Joe is that they are life-long politicians that have spent their entire careers listening to polls and lobbyists to determine their policies.

Here are the specific platform issues that Bernie Sander’s has put forward that appeal to me:

If you’re middle class, please do yourself a favor and look at Bernie Sanders platform. It’s easy reading. If you will keep an open mind, I hope you find enough issues that you agree with to support Bernie Sanders for President.

UPDATE: If you like to support candidates because of who else is, check out Bernie’s celeb backers: