Here’s your chance to win $50 and take the family to see Love The Coopers. Just leave a comment and I’ll randomly pick a winner. You’ll get a $50 Visa gift card to spend at the movies (provided by CBS Films.)

Love The Coopers follows The Cooper clan as four generations of extended family come together for their annual Christmas Eve celebration. As the evening unfolds, a series of unexpected visitors and unlikely events turn the night upside down, leading them all toward a surprising rediscovery of family bonds and the spirit of the holiday.

Thanksgiving was a bigger holiday than Christmas at the Going Like Sixty house. At Christmas time, we wanted to be home – and so did everyone else in the family. We didn’t live close enough to each other to go visiting.

Our Thanksgiving looked a lot like a scene from Love The Coopers – except we had a “kid’s table.” 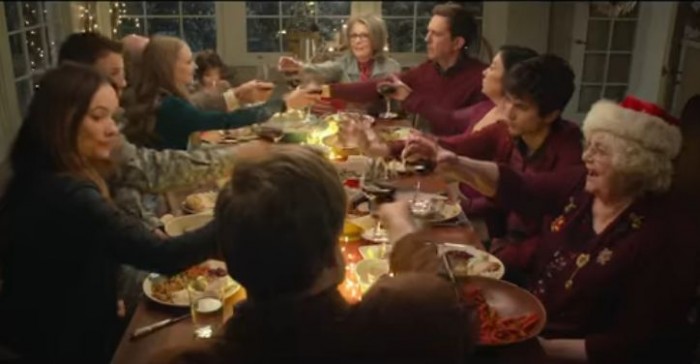 A tradition after we stuffed ourselves with Nancy’s fantastic turkey feast was to gather around the dining room table for a rollicking game of what Nancy called “Dirty Bingo.” Everybody would bring a small gift and if you won a game of Bingo, you choose a prize – any prize – even if someone had won it before you. Thus the “dirty” part of the game. There were always “cool” prizes that everybody wanted and the prize would change hands often before all the prizes were claimed.

Except for the Mincemeat “prize” my Mother brought one year.
Mincemeat is a mixture of chopped dried fruit, booze and spices and beef. It is always in a jar before being served – most often as the filling for a pie. My mother and dad loved Mince Meat Pie. The rest of us — not so much.

Her “prize” was won by Bulbous early in the game… you can imagine the reaction when it was unwrapped. Amy (the nickname Bulbous was applied after college by her soon to be husband) was stuck with that prize even though when a bingo game ended and it was time to choose a prize she would cheerfully – sometimes plaintively – offer her “great prize.”

Of course eventually Grandma won a game and after much studying of all the prizes before her, reclaimed the Mince Meat.

It looks like Love the Coopers will be the feel good movie of the holidays. Don’t forget to comment and have a chance to win a $50 Visa gift card. Open to US mailing addresses only. Prize courtesy of CBS Films.