Our normal evening routine is for me to let Sedona and Sofi out to wander about and pee. I walk with them keeping my eye out for bufo toads because they can harm dogs if they decide to munch one.

New Year’s Eve we did it differently. Nancy let Sedona and Sofi out and shortly thereafter I heard “Mark, come now.”

As I came through the door, she was calmly herding the dogs back inside. She pointed to the steps on the sidewalk where a two-pound toad was sitting. (Similar in size to the one pictured above from an earlier conquest.)

As we discussed the plan of attack, she spotted a second equally large bufo at the top of the steps.

These Toads Needed to Be Spade

The thing about bufo toads is that even though they are ugly as hell, they aren’t stupid or blind. I knew that even though he was facing the steps I had to proceed with caution to get my killing tools – a spade and a knife on the end of a bamboo stick.

Not an easy task because to get my Toadal Annihilation tools I needed to walk within a couple of feet of Toad 1. 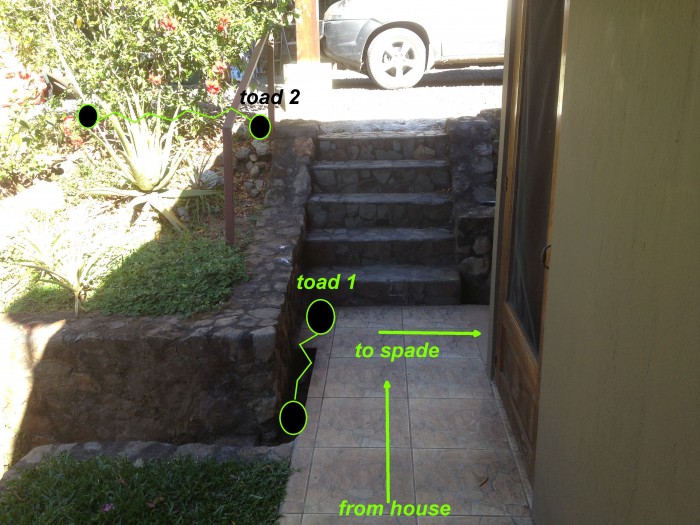 Nancy said she would keep an eye on them while I sneaked by… they are surprisingly quick when they move.

I was able to squeeze by Toad 1 without him moving until I turned around with the spade in my hand. He then decided it was time to move – hopping into a drain. Lucky for me – toadally unlucky for him – that this move made him an easy target and I pinned him down easily.

Their skin is so tough I could not penetrate it with the corner of the spade, so I asked Nancy to get the knife-on-bamboo killing tool.

By this time Toad 1 had puffed himself up nicely because that’s what they do.

It made a pleasing sound – like opening a can of soda – when I stabbed Toad 1. Kind of a pop/fizzzzzz sound. After a few more jabs I decided it was dead enough and I picked him up on the end of the knife-on-bamboo to toss over the fence.

Nancy had positioned herself in the driveway to keep an eye on any movement. As I crept up the sidewalk, raised the spade, Toad 2 hopped into a nearby bush. But within a short time, my experience in Toadal Annihilation paid off and he was soon flying over the fence too.

Out with the Toad – in with the Miscue.

I came inside and banged my head on a hanging lamp. 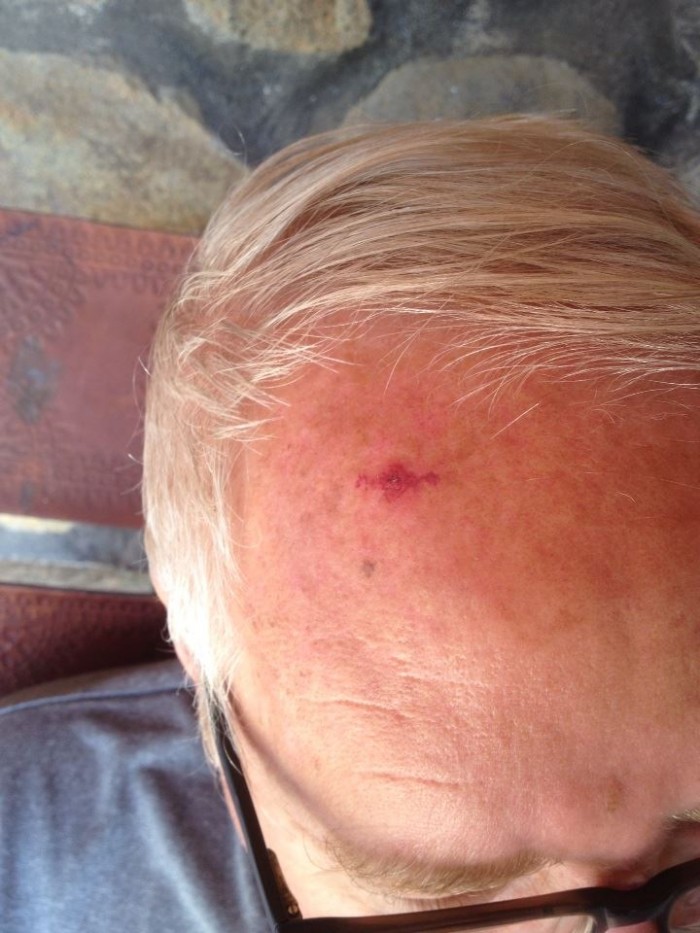