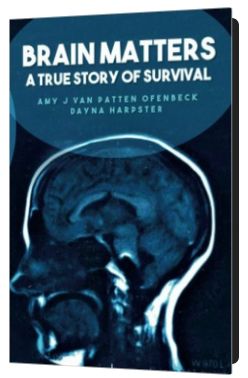 As she puts it:

Bulbous is an author.

A True Story of Survival

A true story of how a 26-year-old TV news anchor survived 8 brain and spinal surgeries from a ruptured brain aneurysm.

In July 1997, while she was working for a television station in Ft. Myers, Florida, our lives changed drastically.

Her aneurysm put her in intensive care for weeks and weeks. It also paralyzed a vocal cord leaving her without a voice for a year before surgery in Nashville’s Vanderbilt Voice Center would take care of it. Today she’s doing well with her husband, St. Todd de Cubbville and two huge doggies: Satchmo, a German Shepard, and Gillespie, a Golden Retriever, while working part-time for Goodwill Industries of Southwest Florida’s E-commerce department.

As her neurosurgeon said at the time… “very few people survive…” One of his favorite descriptions was that she had a “swollen, angry brain.”

Here’s one of many video stories that have been done about her during her incident.

Having lived through her story, I don’t know that I’ll have the guts to read the book.

Here’s the link to order the book: