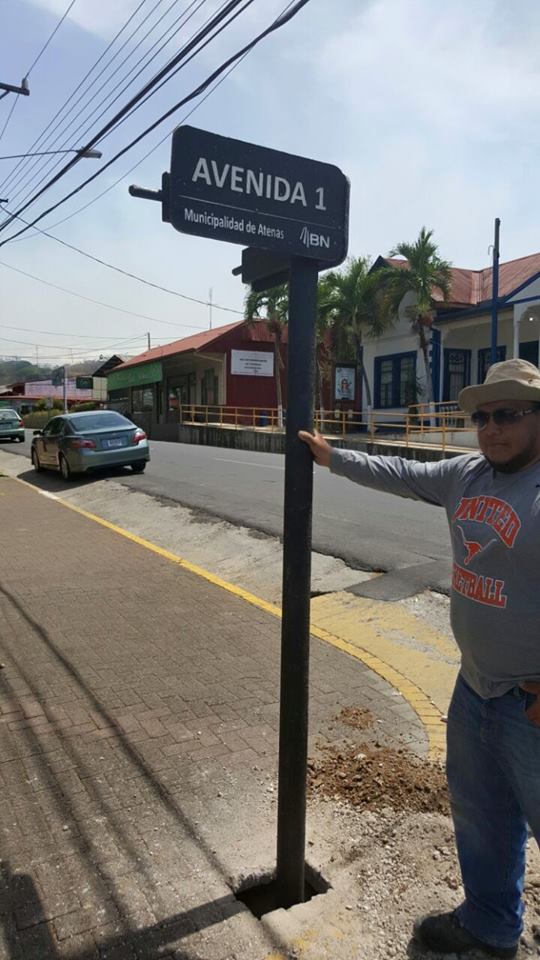 Atenas is another step closer to having real street addresses – at least in the central business district. Street signs will be installed!

Previously, a business was known by it’s location in relation to another business or landmark… eg: across the street from the church.  50 meters from the Justice Center.  (a block – no matter how long – equals 100 meters)

Now the streets will at least have names and numbers. It will be interesting to see how business chose to number themselves. And how long the signs remain in place. I’m not optimistic that we will soon see Pop’s Ice Cream Shop – located at the Corner of Avenida 1 and Calle 6.

Here’s the announcement from the municipality…

• The signs will be installed in the quadrants of the central district of Atenas in the province of Aajuela. Between 3 and 14 and 5 and 10.
• will be placed 52 posts and 104 peañas vial of nomenclature to identify the streets and avenues for his name. With the aim of promoting both the inhabitants of the Canton, shops, and people from foreign countries who visit us, or choose to reside in our town.
• It is a partnership between the city of Athens, National Bank and development association of Santa Eulalia, through participation in the project productive in communities in the area of social responsibility of the national bank.
• An agreement was signed between the company hired and the association of holistic development of Santa Eulalia since the funds provided by the national bank should be channelled through an association formed by law 3859.
• the materials to build these signals are plastic wood, which are 100 % Recycled; equals seventy thousand plastic bottles of 600 ml equivalent to 2111 pounds of material recycled plastic.
• the total cost of the project is 9 700 000 colones; providing the national bank of Costa Rica 8 000 000 colones for the development of the signs and the municipality 1 700 000 Colones, for the installation of the lettering and the design of the project.