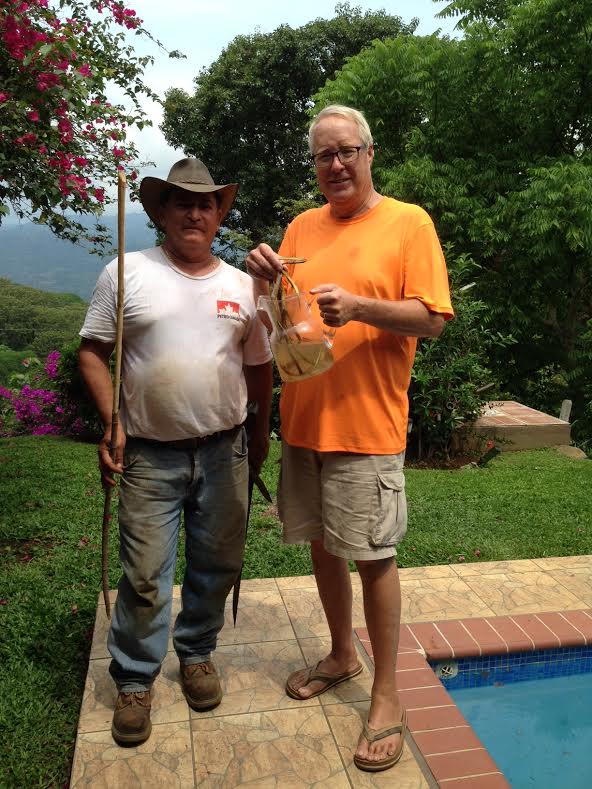 Mario is our gardener. Today he told me about a popular natural remedy for a sour stomach – or refreshing drink – that is common among the Ticos.

It’s called mozote… good for the gut! And we need all the gut help we can get.

… mozote – a mucilaginous plant* – is also highly beneficial for intestinal health. It’s like an emollient for your insides! The locals make a drink from it and enjoy it regularly to maintain intestinal health!

He then took his knife to shave the bark from the branch. Once he had eight strips of bark he took them to a nearby rock and used another smaller rock to smash the shavings. He emphasized that it should be a small tree.

The idea is to put the shavings in a large container, add water, and refrigerate. He said to wash my hands and massage the shavings. After a few squeezes the water turned into a thick liquid.  Others say use the branches themselves after the bark is removed.

After refrigeration, Mario said a few hours – others say overnight,  pour the concoction into a bottle – making sure I don’t get any “trash” into the bottle and ENJOY.

“Enjoy” is not a word I would use… it’s totally tasteless! I guess adding some fruit juice or a little sugar would make it refreshing…

On the other hand, tasteless would be a good thing if using mozote as a natural remedy for stomach upset.