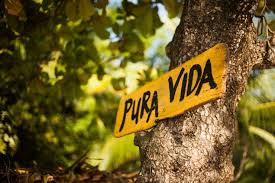 We all complain about the Gringo pricing – where it appears that Gringoes get a different price than Ticos. And the car mechanics and electricians and property surveyors, etc . etc that have two sets of prices… it may not be illegal, but it sure leaves a bad taste in your mouth.

But it is apparent that there are many honest Ticos.

With the recent spate of robberies and all the bad news stories regarding the downside of CR living, I think a good news story is in order. Yesterday I went to town and stopped at the Coope in the afternoon for groceries. I was in a hurry to get home so I unloaded my cart and left the cart in the lot (I know….bad manners but I rarely do that). About 5 last evening, Steve got a call on his phone from a gentleman asking for Pamela Houston…all in Spanish so he gave the phone to me. My Spanish is passable, not fluent, but I gathered that I had left a card of some kind at Coope, even though I knew I paid in cash for groceries. He said he had the card at his home in Estranrillos. Thinking it as likely something minor, and not really being able to understand all he was saying, I took the man’s name and arranged to meet him Saturday morning at Coope and hung up. Then I began to wonder what the card could be and went searching for my wallet. Yup….no wallet. Now I’m in a panic….all my ID, credit cards, driver’s license, not much money but that was minor in comparison. I ran through my brain what I would have to do to replace all this, especially here! I checked the phone to call this man back and the record of the call said “no number”. So what now? Do I cancel the cards and go through virtual hell to get it all replaced? Take a chance that he would show up? After all, he called me and was willing to meet the next day. I knew I couldn’t wait overnight, so we got in the car and drove to Coope…maybe he is an employee who found my wallet and took it home for safekeeping. We got to Coope and to my great relief, saw Sylvia Spix at the outdoor café. This lovely lady put aside the work she was doing and agreed to help me and we spent some time going from employee to employee asking if this man worked at coope (no) and did anyone know him? (again, no). I have to admit, my hope was sinking. Finally we figured out where he might live (I was confusing the local name) and Sylvia made contact with a woman from the same neighborhood. By chance, she happened to be at Coope and came out to give directions to this man’s home. Off we went and sure enough, we found the house and the most delightful man and his wife returned my wallet to me, completely intact including even a ring I had removed and left in the change compartment. I had, apparently, left it in the cart outside. Such a huge relief and such wonderful people and yes, I did reward him. Thank you Sylvia, I could not have done it without your help. Above all, thanks to Antonio Cicada for his honesty and diligence, finding Steve’s phone number on a scrap of paper among many scraps, in my wallet…I hope this helps to restore some lost faith…Pura Vida!

Great people those Ticos. Funny thing is that the same happened to me some years ago. I put my wallet on the roof of the car to get my kid into the car. I forgot the wallet and somewhere on my drive to Los Angeles it fell down. All important documents were included in the wallet. Someone found it and, I don’t know how, she found out my phone number and called me. At this time my Spanish was barely existing and she got someone one the phone who could speak English. We met at Ferreteria Vargas and I got everything back. She did not even want a reward but I insisted.

I once lost my very expensive glasses on the bus from San Jose Sur. I spent the day looking and talking to the bus driver, etc. But, never found them. Months later I was walking in my neighborhood (San Jose Sur) and a man stopped me and said he had my glasses. I couldn’t believe it. They were at his house but he was on his way to work. When he came home and got off the bus he called me. We met up and I took him to his house and he actually had my glasses. How he even remembered me was amazing. Pura Vida!

When we first moved here Pete went to the Coope to shop (I was in the states). A few days later I noticed on the bank statement the charge was over $200 ! In checking he said it should’ve been like $20. Nine years ago the only person we knew we could turn to was Pablo Arias. Off he and Pete went to the old store-sure enough they had $200 in an envelope in the register with his name on it. They had accidentally overcharged him and did not know how to reach him!
Only in Costa Rica!

While shopping at the Escazu feria (farmers’ market), my wife, Jeni, noticed her purse was gone. She quickly retraced her steps through the market while I used FindMyPhone app to locate her phone and purse. I located her phone up the mountain in San Antonio, so we set out looking for it. As I approached the block where the phone was, I thought, this is stupid. If a criminal stole her purse, how am I going to confront them? Bust down their door? We met a friendly shop owner who called the police, and they arrived fairly quickly. More