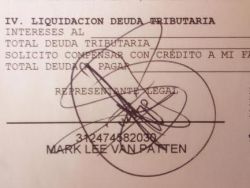 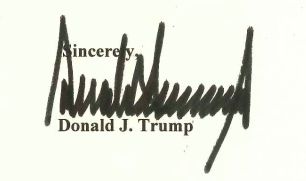 Remember in the old cowboy movies where the prospector finds his gold riches and sells it to the wealthy landowner for a pittance?

“Make your mark” would be the way they always closed the deal because the gold miner was illiterate and couldn’t write.

We’re getting close to that again because people don’t write, and kids don’t learn or practice, cursive writing anymore. People freak out that the Common Core Standards don’t include teaching cursive.

Some have adopted this practice already. It seems to me that in Costa Rica, making a distinctive mark, with little resemblance to an actual name, is preferred.

Some examples of distinct signatures…

At the top is the signature of Oscar, a local topographer, then second is Pablo, a local attorney, Donald Trump, Hillary Clinton, and finally Barry Obama. All these signatures appear on public documents so don’t fear that I’m putting them out there for bad guys to forge.

What’s the big deal with teaching cursive anyway? Who actually writes stuff longhand? And if people do write longhand they probably print because handwriting is mostly illegible to anyone but the author.

I’m in favor of encouraging kids to learn make a unique mark that they can reproduce at will. And leave the longhand cursive writing to us Boomers.

And I’ll put my John Hancock on the idea.