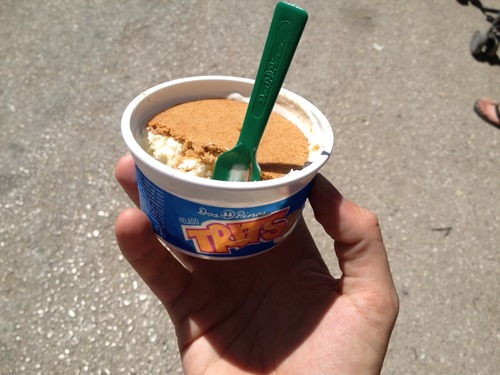 Mike The Iceman (cuz he sold Carrier stuff in his past life) put a new Costa Rica temptation in my path.

The photo above might get me shot in Costa Rica – apparently using a spoon to eat Trits is a gigante nada-nada. They are meant to be inhaled as quickly as possible to insure massive and rapid brain-freeze.

Sorry about the music, the video isn’t mine…

If you want to try a Trit (I say it’s pronounced Treet as the spanish would pronounce the “I” as “ee” come to Costa Rica.) Mike The Ice Man says EVERYONE sells them in here. Or if you’re lucky you might find them at your local US store. They maybe distributed by Frozen Cow Distribution, LLC – the exclusive Importer, Seller, of Trits here in the United States! Contact them: 609-365-2990 or Facebook.

Trits are made at Dos Pinos. They have a large plant not too far from our house.

The Trits come to America via boat – 70,000 of the ice cream sandwiches arrive in each shipment – and then a freezer truck delivers them to Murray’s storage facility in Vineland. From there, he personally drives the ice cream to the local retailers that have agreed to carry the product.

All I know is this temptation will be hard to resist in the future.