Everybody talks about going on Safari to see the Big Five.

In Africa, the big five game animals are the lion, leopard, rhinoceros (both black and white species), elephant, and Cape buffalo. They are called the Big Five because big game hunters coveted their heads as trophies.

We saw them all – well one of us did. We had completed all our game drives and the safari and were on the way to the hotel in Nairobi before our flight that evening home. We passed the national park abutting the city and our guide was still scanning the horizon, explaining that this park was known to have rhinos. Just as we passed the final spot where we could see into the park, Nancy asked: “Are they the ones with the big horn?”

Yes, she is claiming she saw all Big Five – including the rhino!

And we saw a lot more than the Big Five.

We went on safari to see Giraffes.

Our first wild animal spotting was leaving the airport. Just a mile outside the main gate, the taxi driver slowed to a stop and pointed out a herd of 30 impala grazing along the road. Amazing!

We saw lots of giraffes! Never enough that we tired of watching them. We saw them in every park we toured, but the Masai Mara – our last stop was the most sparse.

We saw hundreds of wildebeest as part of their migration. Same with Zebras – two different species. We saw elephants, water buck, cape buffalo, gazelles (many species), antelope, oryx, in large groups. We even saw an Ostrich and other beautiful birds. Is every bird in Africa as colorful as the ones we saw? We did tire of seeing Wildebeest, zebras, and cape buffalo!

And we saw nature in action. At the end of a game drive one day, our guide spotted a Zebra standing alone near a river. We could see from a distance his hind quarter was unnaturally dark. The guide said the Zebra was badly injured. He asked if we wanted to get closer. The group decided no. The guide was appreciative. We all knew the animal would not last the night. The following morning, unknown to us, the guide headed right out to see where the Zebra was standing. It was gone. Nearby, a pack of Hyenas were gathered. We all knew why. 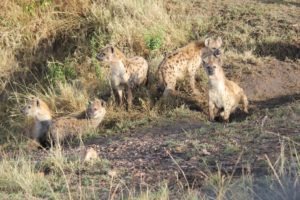 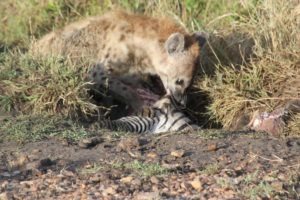 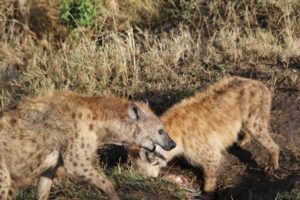 The hyenas were finishing off the Zebra. We didn’t see (or hear) the kill, but we did hear the Hyenas crunching bones and barking. Hyenas are not competitive when it comes to eating.

Later the same day, we had an even more dramatic encounter with Mother Nature.

The biggest thrill for me was the a cheetah killing a gazelle on the run. I had earlier asked the guide how many kills he had seen. He estimated about a dozen in the fifteen years he had been a guide.

We (along with a dozen other vehicles) spotted a Cheetah with her family near a tree. She soon ambled into the tall grass and her family followed. We got close enough to get our pictures and then moved away leaving the Cheetah to the professional photographers. The “brothers” Cheetah put on a show, tussling and rasslin’ their way through the grass. 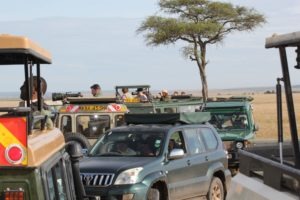 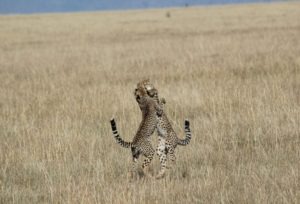 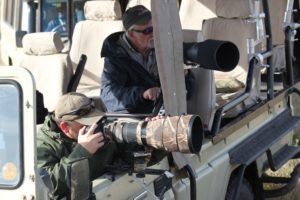 NOTE: Don’t let the closeness and number of vehicles concern you. This was rare. There are millions of animals in the Maasai Mara. We often went for hours without seeing another human but saw hundreds of animals. The unusual animals attract human visitors!

We then moved a few hundred yards from the Cheetah family. Suddenly every animal near us started running. First a canter and then full speed flight. Immediately we knew the Cheetah was hunting. She was unsuccessful her first run, suddenly pulling up from a full speed chase and sitting down.

Shortly thereafter, Nancy said, “Oh don’t get the baby – don’t get the baby.” She saw a small gazelle alone, oblivious at first to the danger. I was focused through the viewfinder – missing the big picture. Nancy said the gazelle bounded away making a series of quick cuts trying to avoid being killed. But of course, it was no match for the Cheetah. 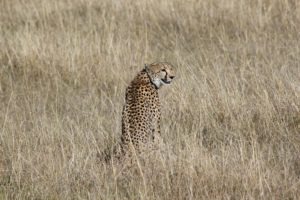 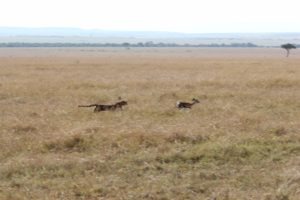 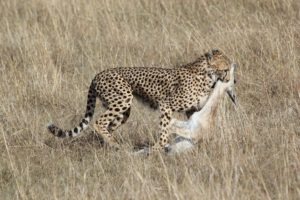 The mother Cheetah sat beside her kill for a minute or two looking for her cubs. She then started dragging the kill through the grass – our guide explaining that we were making her nervous – as were the other photographers who quickly roared into position between her and us. I had very mixed feelings about what we saw.

We had come to see animals and were not disappointed – not even in the slightest. It made the long, grueling trip worthwhile. A wedding anniversary to remember.

Book by May 31, 2019 and save $250 per person off our regular price on this Kenya Safari Exploration and applicable extensions. Promotion is not valid on existing reservations or combinable with any other promotions. To redeem the discounted savings, use promotional code MARK250 at the time of booking. Click here to book or call 877-900-9777 to speak with one of our reservation specialists.