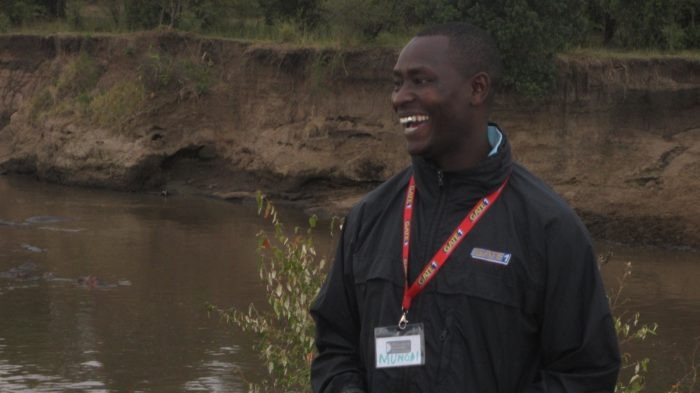 Mungai – Our tour guide on the banks of the Mara River – we saw that smile a lot.

One of my big concerns – never having been on a guided group tour – was the people in the group.  What are the chances that we would be compatible, even to the point of having similar political views? It was no small concern because of the divided nature politics in the U.S. have become.  And what if we had a know-it-all in the group? Or a stick-in-the-mud?

No need to worry.

Our first encounter with a member of the group was in the Radisson Blu hotel gift shop. I was waiting outside on a bench while Nancy shopped. She found her first giraffe souvenir and a woman with an elephant preservation tee shirt was also shopping. She looked like a tourist too. I told her that when she left the shop and we struck up a conversation where she revealed she was with the Gate 1 tour traveling alone. Off to a good start.

Our tour guide, Mungai,  arranged a group meeting for everyone the next morning, after breakfast, in the hotel conference room.

We got swag from Gate 1: safari hats, a small blanket and a canvas pouch for papers. Good start!

Mungai asked us to introduce ourselves – including how many Gate 1 tours we had taken. We went first. It was our first Gate 1 tour and Nancy explained it was our 50th Wedding Anniversary trip. The group applauded and congratulated us.

Every one of the rest of the group had been on multiple Gate 1 tours.  Some as many as four or five tours! A great sign of good things to come.

Mungai explained how Gate 1 tours work… what was included: eg beer and wine with lunch and dinner, water on the game drives, when to tip, when to negotiate souvenir prices, optional tours etc. etc. To Gate 1 Travel’s credit: all the topics had been covered extensively on their website and in pre-tour documentation.

He then wrote on the easel five Swahili words that would come in handy:

(I added “tuende” (twende) a word I got from reading the Kenya newspaper to my vocabulary… “let’s go.”

He noted that adding “sana” after Asante or Nzouri meant “very” Asanta sana: Thank you very much.

Jambo was used everywhere by everybody… often Jambo! Hi! or Jambo! Hello!  Answering Jambo! always got a smile. Dropping a sawa, sawa in the english conversation always got a fun reaction.

After our Swahili lesson, Mungai explained how the group would be divided. Joel (jo-el) would be meeting us later with the second vehicle.

We would split into two smaller groups of five and four. Later if we wanted to switch it was up to us. We never rotated.  There were five plus Mungai in our Land Cruiser.

Driver and passenger seat (for the cooler with water), two single seats with aisle at door, two single seats and a bench seat for three in the back.  Sliding windows and a pop up top were used during game drives. No air conditioning.

We grabbed the back seat because I could stretch out and have plenty of legroom by sitting in the middle. It also gave us room for “stuff.” The couple from Idaho took the door seats and a single woman took the middle two seats. She sat in one, put her stuff in the other.

Turns out, I also got acquainted with the hotel security and engineering departments! I was fully aware of the voltage difference between Kenya and the U.S. And the outlet difference too. I was prepared to buy a electrical converter to change the voltage from 240 to 120. My son-in-law said that might be unnecessary because all gadgets today were compatible with 240 volt.  I checked all our gadgets and sure enough he was right.

I use a CPAP – a breathing machine for sleep apnea. Essential for a decent night’s sleep. I also wear hearing aids which have a charger eliminating changeable batteries. And of course we had two phones, iPad, camera batteries, and tablet that needed charging.

One outlet converter and one extension.

Except I forget to make sure the extension was 240 v. compatible.

Powee went the extension the first time I plugged it in at 10:30 pm the night of our arrival. Yeah, imagine my reaction.  Luckily, nothing was plugged into the extension. The night might not have been sleepless, I was so exhausted from the trip. But add the stress of the thoughts of trying to locate a replacement – with U.S. plug – the next day in a strange city in a strange land, pretty insured a fitful night.

Aside: I woke up at 1:20 in the afternoon the next day! Tip: not recommended and we knew better. Best to wake up in the morning local time to begin to adapt to the new time zone.

I stumbled down to the front desk and asked for some help in finding a replacement. The desk clerk promptly called a security guy to help. He said he would send someone from engineering to our room to help.

Ten minutes later two young men showed up at our door. I explained my predicament and said I needed help finding a place to buy a new extension. They looked over the extension – successfully masking their smirks.  “What if I can repair this one?” one asked.

I had forgotten that I had the “don’t fix, replace” American mentality. After six years in Costa Rica, I should have remembered that many developing nations REPAIR almost anything.

The engineering guy said he would be back in ten minutes. He would need to go to his workshop. Sure enough, ten minutes later he was back, plugged in the extension and tested it with his voltage meter. Bingo! It worked! He explained that “all” he needed to do was unscrew the extension are remove a resistor.

OMG, he was my savior.

I tipped him well.

I gave him a glowing reference on the feedback form.

And we charged off on our Kenya Safari with a bang!

Book by May 31, 2019 and save $250 per person off our regular price on this Kenya Safari Exploration and applicable extensions. Promotion is not valid on existing reservations or combinable with any other promotions. To redeem the discounted savings, use promotional code MARK250 at the time of booking. Click here to book or call 877-900-9777 to speak with one of our reservation specialists.